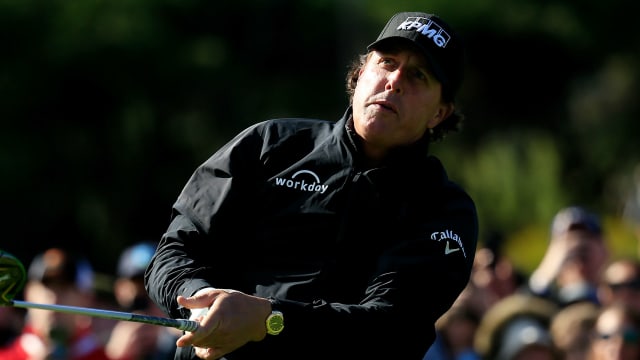 Phil Mickelson is in control at the Pebble Beach Pro-Am, but he must return on Monday to close out a win.

Players have been battling severe weather conditions all weekend and delays have pushed the final round to Monday, when play will resume at 08:00 local time (16:00 GMT).

Mickelson will carry a three-shot lead into the final day, sitting at 18 under through 16 holes.

His mistake-free round has included six birdies, but he will have to hold off Paul Casey, who is at 15 under and has three holes to play.

Mickelson has won the tournament four times, the most recent of which was in 2012. Only Mark O'Meara has had more success at the event, winning it five times.

Casey is three shots behind Mickelson in a tie for second with Scott Stallings. However, Stallings and the rest of the top 10 have completed their final rounds.

Jason Day and Kim Si-woo are tied for fourth place at 13 under. Scott Langley holds sole possession of sixth place, while Kevin Streelman, Brian Gay and Lucas Glover are tied for seventh at 11 under.

Scott Piercy is one of four players rounding out the top 10 at 10 under.

Dustin Johnson, the world number three and last year's runner up, improved on his previous round with a one-under 71, but still sits down the leaderboard in a tie for 45th place at four under.