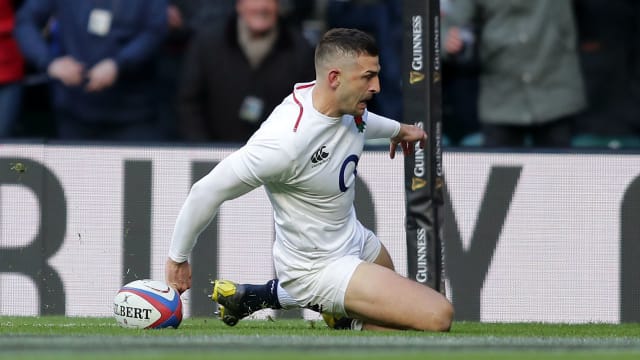 Jonny May scored a first-half hat-trick as England routed France 44-8 at Twickenham to maintain their perfect record in the 2019 Six Nations.

After overcoming reigning champions Ireland in their first game, Eddie Jones' men produced a dominant display that was spearheaded by wing May's treble inside the opening half an hour.

Henry Slade also went over prior to half-time, with a penalty try and Owen Farrell's score coming after the break.

While England's title credentials were strengthened with a second bonus-point win, which put them back top of the table, France saw theirs virtually extinguished nine days on from throwing away a 16-0 lead in a loss to Wales.

For the fifth successive match England registered a try inside the first five minutes, May racing through to dot down following Elliot Daly's measured kick in a move that would prove fruitful for Jones' men in the first half.

Two Farrell penalties were sandwiched by Morgan Parra getting France on the board before May went in again, collecting Farrell's long pass and side-stepping Damian Penaud to finish.

And May completed his hat-trick as he again raced onto a kick, this time delivered by Chris Ashton once Parra misjudged a high ball.

Penaud was being targeted defensively but he did score France's only try after Yoann Huget had shaken off three would-be tacklers.

Yet England entered the interval with a 30-8 lead as Slade scored their fourth try on the stroke of half-time, with Danny Care's grubber kick turning the French defence once more.

That advantage was increased to 36 points by the hour mark as England's kicking game continued to expose French frailties.

Jones' side were awarded a 49th-minute penalty try when Gael Fickou was yellow carded for hauling down Ashton before he looked to collect Slade's kick through, while Farrell got in on the act after following in his kick when Antoine Dupont nudged the ball away from a diving May.

3 - Jonny May is the first @EnglandRugby player to score a hat-trick against France since Jake Jacob back in 1924. Flying.

England found a formula that worked inside the opening two minutes and kept utilising grubber kicks to devastating effect. Two of May's three tries came via that method and the tactic was used in the build up to his other score. Penaud and France had no answer to one of the world's best finishers.

- England have now won 10 of their last 13 Six Nations matches against France, including their last seven in a row at Twickenham in the tournament.
- England won by 36 points, only once before in Test rugby have they won by a greater margin against France – a 37-0 victory in 1911. England's 44 points was also their fourth most ever in a match against Les Bleus.
- Jonny May crossed for three tries, the first England player to score a hat-trick against France since Jake Jacob back in 1924.
- The winger has scored 12 tries in 13 Tests since the beginning of 2018, his three tries against France taking him ahead of New Zealand's Rieko Ioane who has scored 11 tries in 11 games in that period.
- England have scored their opening try within the first four minutes of eight of their 14 Tests since the beginning of 2018, May crossing for four of those eight tries.
- Damian Penaud scored his first Six Nations try for France, his father Alain also scored his first Five Nations try against England, in 1992.

England face Wales, the only other team with two wins from two, in Cardiff on February 23 on the same day France will look to kick-start their campaign against Scotland in Paris.