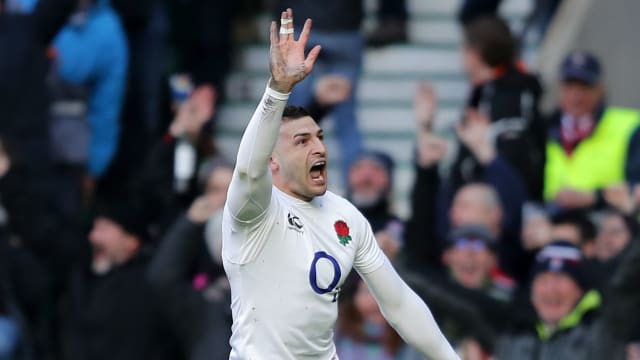 Hat-trick hero Jonny May was delighted to see England maintain their levels from their opening Six Nations win over Ireland in a 44-8 demolition of France at Twickenham.

Eddie Jones' side moved back to the top of the table ahead of meeting unbeaten Wales later this month, with the bonus point secured when Henry Slade went over before the interval after May had already crossed for a treble.

A penalty try and Owen Farrell's score after the break made the final margin of victory even greater, and May was pleased that there was no dip in England's performance after the impressive win over reigning champions Ireland in Dublin last weekend.

"That was the challenge, I guess, trying to raise the bar after a really good team performance last week," he told ITV.

"We came out and definitely played some good rugby at times."

It's full time at Twickenham and England have beaten France in the #GuinnessSixNations#ENGvFRA#CarryThemHomepic.twitter.com/nQmELb2KBh

Leicester Tigers wing May's first try came inside the opening two minutes as he raced onto a kick from Elliot Daly, and it was via that method that England frequently found joy.

May's hat-trick score was almost a carbon copy of his opening try, with Chris Ashton threading the kick behind the French line on that occasion.

"It's just the brand of rugby we want to play, we want to put teams under pressure," May explained.

"I'm just doing my job - I know that's scoring tries - but they're equally important [due] to everybody else's roles."

The last Englishman to score three tries against France did so almost a century ago, with Jake Jacob grabbing a hat-trick in 1924.

"It's special, I'll remember this day," sad May, who has now crossed in four successive Six Nations game.

4 - Jonny May has scored in four consecutive #GuinnessSixNations appearances, only Will Greenwood, Mark Cueto and Anthony Watson have scored in as many consecutive matches in the tournament for England since 2000. Finisher. pic.twitter.com/hb8AKj9CxV

"To score a try for your country is awesome, and especially at Twickenham, so I'm very grateful, feel very lucky."

Farrell finished with 17 of England's 44 points having added three conversions and two penalties but there was no doubt that May was the stand-out performer.

"He's doing his job unbelievably well," Farrell admitted. "He's chasing kicks, putting pressure on teams, he's getting the ball back for us, he's creating chaos and he's scoring a good few tries off the back of it."