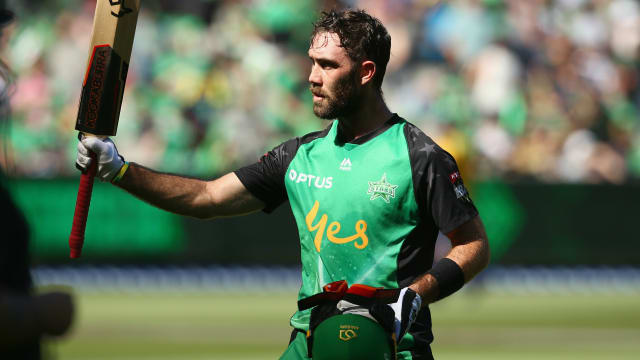 Maxwell dazzled with 82 runs off 43 balls as the Stars leapfrogged Brisbane Heat into fourth position in Sunday's final game of the regular season.

The Australian all-rounder's memorable display saw the Stars post a total of 168-6 at the MCG in Melbourne.

Maxwell's bowling team-mates than finished the job, humiliating the visiting Sixers for just 74 all out as Sydney blew the chance to host a BBL semi-final.

Local favourite Maxwell took centre stage when the Stars needed him most in the do-or-die clash.

Maxwell caught fire late in the innings, scoring his final 65 runs off just 23 deliveries, including three sixes in the final over from Ben Dwarshuis (1-34).

The Stars – who were sent into bat by the Sixers – were 101-4 in the 16th over when Maxwell pummelled Sydney's bowlers, while he also claimed a wicket.

Runs, wickets, catches... EVERYTHING! @Gmaxi_32 dominated against the Sixers and is the #BBL08@dream11 Fantasy MVP.

GAME TO FORGET FOR SORRY SIXERS

Bowled out for 74 – the fourth lowest total in BBL history. It was an embarrassing outing for the Sixers.

Maxwell's performance alone outscored the Sixers, whose previous lowest score was 99-9 in 2017.

Wickets fell regularly as Daniel Hughes (12), Steve O'Keefe (11 not out) and Curran (10) were the only Sixers batsmen to reach double-figures.

Attention will now turn to the semis, with minor premiers Hobart Hurricanes awaiting the Stars.

The Stars and the Hurricanes will meet at Bellerive on Thursday.

Meanwhile, the Sixers will be back in Melbourne for Friday's clash with the Renegades at Marvel Stadium.