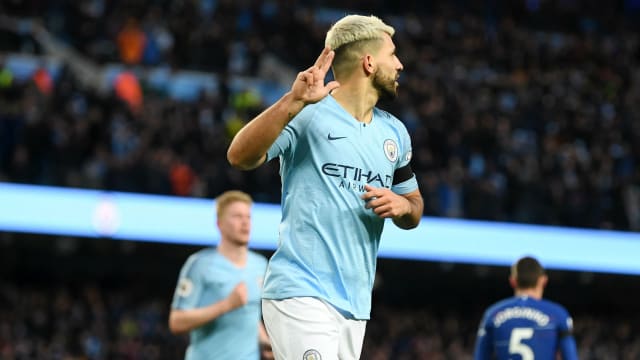 City were 4-0 up after just 25 minutes, as Raheem Sterling and Ilkay Gundogan found the net either side of Aguero's first two goals.

The Argentina striker's opener was a 30-yard stunner and he sealed his treble from the penalty spot early in the second half.

That meant Aguero went level with Alan Shearer for the most hat-tricks in the Premier League, also taking his top-flight goals tally for the season to 16.

And Guardiola is astonished at Aguero's continued consistency in his eighth season with City.

Gonna have to make room for another  now, @aguerosergiokun! pic.twitter.com/NModBypePp

Speaking to BBC Sport, Guardiola said: "I have said many times, Sergio scores every single season a lot of goals.

"I admire these kind of players, the consistency. Young players come, but some stay for a long time, that is fantastic."

It was also put to Guardiola that Aguero might have surprised the coach by how good he has been in recent years, but he dismissed such suggestions.

Adding to Sky Sports, he said: "Aguero is a player that was always involved in what we want to do, he wants to help us with the structure of the team.

"Chelsea depend a lot on our pressing, but we have a lot of quality. Sometimes he is a little bit tired, but he is a special player."