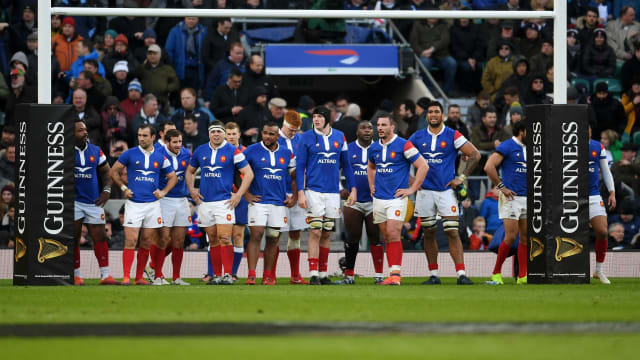 France were left reeling by England's kick-chase tactic in the first half of their 44-8 thrashing at Twickenham, according to Les Bleus captain Guilhem Guirado.

Elliot Daly's grubber kick through for Jonny May's first try inside the opening two minutes proved to be a sign of things to come as England frequently exposed the space behind France's backs.

May went over twice more to claim a hat-trick before Henry Slade sealed a bonus point just before the interval, with Damian Penaud, the man England targeted time and again, scoring France's sole try.

England were 30-8 up at half-time, which meant the game was over even before a penalty try and a score from Owen Farrell in the second period.

"We never controlled the game in the first half," Guirado told ITV.

"We didn't have good ball and we never came to break the line."

It is nine years since France were last Six Nations champions and, after throwing away a 16-0 lead to be beaten by Wales in the opener of this year's tournament, the loss in 'Le Crunch' virtually ended their title hopes for another year.

"Today we have not made our intensity and we need to work hard to come back for Scotland in the next game," Guirado said.

"It's tough but we need to work very hard to come back."