Black Caps cling on for series win against India 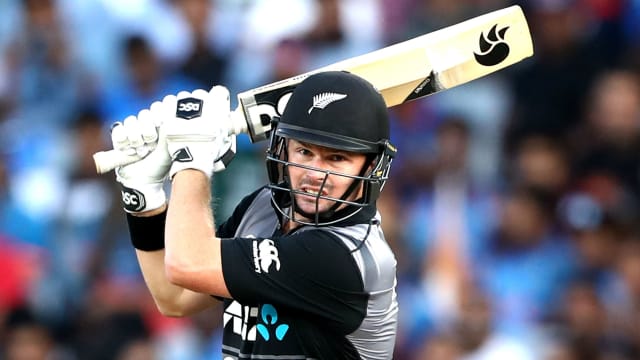 New Zealand held on for a four-run victory in Hamilton to wrap up a 2-1 Twenty20 series win against India.

The Black Caps had won the opener in Wellington before being pegged back by the tourists in Auckland.

But Colin Munro (72 off 40) put in an impressive shift as the hosts posted 212-4 and the target proved just beyond the reach of India, who won last month's ODI series between the sides.

Munro and Tim Seifert (43) combined for 80 runs for the first wicket as India found New Zealand difficult to break down, but both men were ultimately dismissed by Kuldeep Yadav.

For his explosive 72 off 40, @manuz05 is the Player of the Match in Hamilton! #NZvINDpic.twitter.com/BG0Z9R0vmJ

Kuldeep was India's star performer with ball in hand, taking 2-26 from his four overs.

The India innings got off to a far from ideal start, with Shikhar Dhawan (5) caught off the bowling of Mitchell Santner (2-32 off three overs) just five balls in.

Santner was also responsible for breaking India's most fruitful partnership when he saw off the tourists' top scorer Vijay Shankar (43).

Rohit Sharma (38), Rishabh Pant (28) and Hardik Pandya (21) all helped India into a position from which they could challenge for the victory, but MS Dhoni could only manage two on his 300th T20 appearance and things did not go their way in the final over.

Needing 14 off the last four deliveries, Dinesh Karthik (33) refused a single, much to Krunal Pandya's (26) frustration, and he showed his own dissatisfaction after taking the single from the next.

Krunal's straight drive for the boundary then found the stumps at the bowler's end and the match was beyond India at that point.