He doesn't seem to like us - Laidlaw unimpressed with referee Poite 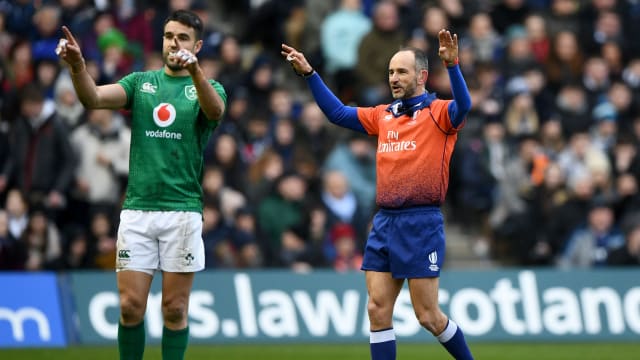 Greig Laidlaw took a swipe at referee Romain Poite after Scotland's Six Nations defeat to Ireland at Murrayfield on Saturday.

Conor Murray, Jacob Stockdale and Keith Earls scored tries as the defending champions responded to their opening loss to England with a hard-fought 22-13 victory.

Sam Johnson scored his first international try in a breathless first half and Laidlaw kicked eight points, but Ireland showed their experience to grind Scotland down after the break.

Captain Laidlaw admitted Scotland were guilty of too many handling errors and also felt French official Poite did not do Gregor Townsend's side any favours.

"Frustrating things as well, Romain Poite picked us up in the middle of the field when Sean O'Brien has ripped the ball out and he's given a knock-on and it's right in front of him.

"He doesn't seem to like us, Romain. He refereed us against South Africa as well and we don't seem to see eye-to-eye. We're not going to blame him, we look at ourselves and we give credit to Ireland."

Laidlaw added: "We are frustrated and disappointed with a lot of things in our performance in terms of a few soft moments allowed Ireland to score, you've got to give credit them, they took their opportunities."