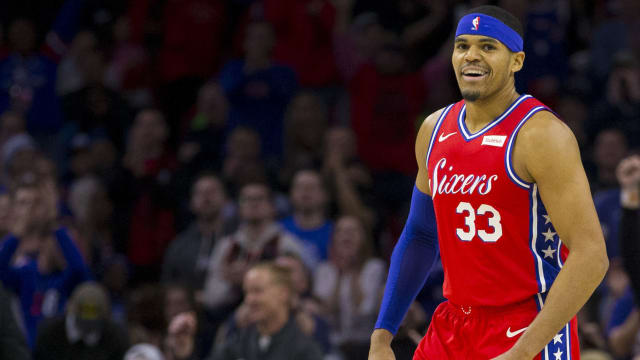 Tobias Harris enjoyed a winning debut for the Philadelphia 76ers, while the Milwaukee Bucks extended their unbeaten streak in the NBA.

Acquired from the Los Angeles Clippers in a blockbuster trade on Wednesday, Harris made his first appearance as a 76ers player in a 117-110 victory against the Denver Nuggets.

Harris impressed with his three-point ability and defense for 14 points and eight rebounds on Friday.

"You could see why people think he's an All-Star," 76ers head coach Brett Brown told reporters after the game. "And I think that his personality and his intellect, his basketball intellect, stands out."

Giannis Antetokounmpo starred as the Bucks won their sixth successive game by topping the Dallas Mavericks 122-107.

Antetokounmpo had 29 points and 17 rebounds against the Mavericks for the Eastern Conference-leading Bucks, who boast the best record in the NBA with 41 wins and 13 losses.

Curry breaks out of slump

Stephen Curry overcame a poor shooting performance to score 20 points in the Golden State Warriors' 117-107 win against the Phoenix Suns.

Detroit Pistons center Andre Drummond had 29 points on 12-of-15 shooting with 20 rebounds as his team won 120-103 and condemned the New York Knicks to a 15th consecutive defeat.

Brooklyn Nets guard Shabazz Napier went 0-for-five shooting with the dreaded "more turnovers than points" night with zero points and two turnovers in the side's 125-106 loss to the Chicago Bulls.

Not up in here!

Making his return to the court after injury and a failed move away prior to Thursday's trade deadline, Anthony Davis produced a big block against the Minnesota Timberwolves.

Tonight's @redbull Energy Play of the Game was @AntDavis23's block to end the first half! #PelicansGameday | #doitBIGpic.twitter.com/w9P5Ilpyoe

Is this going to be a good game? Probably not. But the reason to watch is Marc Gasol will theoretically make his debut for the Toronto Raptors fresh off being traded from the Memphis Grizzlies. It will be interesting to see how the big man is incorporated into the offense as the Raptors have had a lot of success going small and he is a more traditional big man. However, his shooting and passing could be great additions to the club.