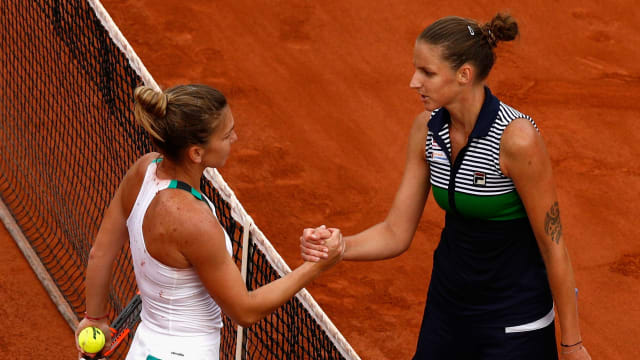 Karolina Pliskova and Simona Halep are set for a blockbuster meeting on Sunday in a match that could go a long way to deciding the outcome of the Fed Cup quarter-final between Czech Republic and Romania.

World number five Pliskova gave the holders and top seeds the edge in Saturday's opening rubber as she swatted aside Mihaela Buzarnescu 6-1 6-4.

But reigning French Open champion Halep responded to get her country back on level terms in Ostrava, defeating Katerina Siniakova 6-4 6-0 to leave the tie poised at 1-1 ahead of her showdown with Pliskova.

"I expect a very tough one," said Halep. "It's Fed Cup, so the pressure is more but it's an open match and I think I'll fight for that chance and I'll be motivated, playing for my country."

That feeling when you win your 5th #FedCup singles rubber in a row and your 17th in all@Simona_Halep  pic.twitter.com/9IliXnSIWV

Halep holds a 6-2 record in the head to head but Pliskova is unconcerned by that statistic.

"The match starts from zero-zero, so there's going to be a chance for both of us, never mind what happened in the past," she said. "I just have it in my head that I beat her [in the Fed Cup three years ago] when we won."

Meanwhile, in Liege, fourth seeds France are in control of their tie against Belgium, holding a 2-0 lead after Caroline Garcia defeated Alison Van Uytvanck 7-6 (7-2) 4-6 6-2 and Alize Cornet's 7-6 (8-6) 6-2 triumph over Elise Mertens, who will look to keep her nation's hopes alive against Garcia on Sunday.

Belarus are in a similarly strong position, thanks to Aliaksandra Sasnovich's 7-6 (7-3) 6-3 success over Tatjana Maria in Braunschweig combined with Aryna Sabalenka's 6-2 6-1 demolition of Andrea Petkovic. Sabalenka will seal Belarus' semi-final berth if she sees off Maria in the third rubber.

The last quarter-final tie to get under way was Australia's clash with second seeds United States, who pulled level at 1-1 in front of a noisy home crowd in Asheville.

Ashleigh Barty put Australia one up with a 6-1 7-6 (7-2) win over Sofia Kenin, but Madison Keys ensured it would be all-square heading into Sunday thanks to a resounding 6-2 6-2 success over Kimberly Birrell.