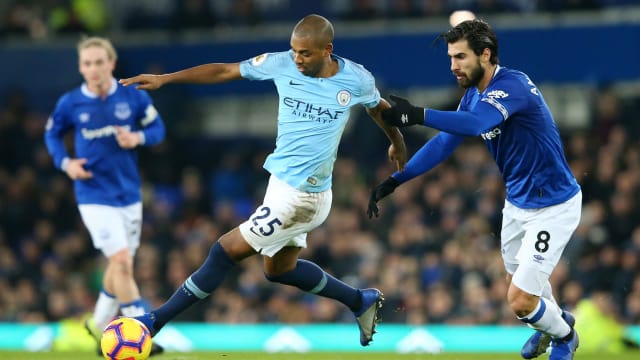 Pep Guardiola believes Fernandinho can thrive as a centre-back during the final years of his career as the influential Manchester City midfielder prepares to make an international return with Brazil.

Guardiola raised eyebrows by selecting the 33-year-old in hybrid centre-back/defensive-midfield role for last weekend's 3-1 win over Arsenal at the Etihad Stadium, with Fernandinho dropping into a back four alongside Nicolas Otamendi when out of possession before driving into midfield to support anchorman Ilkay Gundogan when City had the ball.

He reverted to a more conventional holding role in Guardiola's customary 4-3-3 for Wednesday's 2-0 win over Everton, turning in a typically combative display.

The City manager oversaw Javier Mascherano's transition from midfield to defence at Barcelona and believes Fernandinho is cut from the same cloth – even if he has no doubt over where the player is best deployed.

"I am pretty sure he can play in that position," Guardiola said ahead of City's Premier League match against Chelsea, where they will again seek a win to replace Liverpool at the top of the table on goal difference.

"He's fast, he's strong in the air and when he has the football in front of him he sees the passes inside, his switch of play is excellent.

"He is intelligent to [know when to] go forwards and go backwards, he understands everything. He has to train more at it, but I think he can do it. But of course, his position is a midfield player."

After scoring an own goal in his country's World Cup quarter-final defeat against Belgium, the ex-Shakhtar Donetsk man decided to step away from international football amid abuse aimed towards him and his family.

But a meeting between Tite, national team co-ordinator Edu and Fernandinho last week proved fruitful, particularly with Brazil preparing to host the Copa America this year.

"They understood my situation, I understood theirs, and most of all I admired the respect they had with me during all this time," Fernandinho told Globo Esporte.

"I said that I am available if he wants to summon me to serve the Selecao again.

"[After the World Cup] I was going through a delicate situation that had never happened to me, so I asked for more time to think about whether or not I would come back in the future. My will always has been to serve the Selecao."

Fernandinho went on to praise Guardiola for supporting him during this period, although it would be easy for his club boss to look ruefully upon an international return.

City do not have specialist cover in holding midfield after failing to persuade Jorginho against a reunion with his ex-Napoli boss at Chelsea last year.

"We have some options but today it is not easy to find and buy the players," Guardiola explained.

"We have spoken many times about that. We are trying to help Fernandinho in that position.

"It's not close. But the transfer window is over, until the summer we have time. No problem. Always I am optimistic."