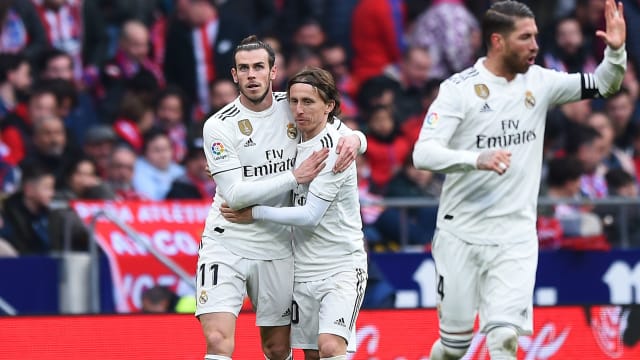 Real Madrid beat bitter rivals Atletico Madrid at the Wanda Metropolitano for the first time, as Gareth Bale's 100th goal for the club helped secure a 3-1 win to move them up to second in LaLiga.

Los Blancos claimed a morale-boosting 1-1 draw at Barcelona in the Copa del Rey semi-final first leg on Wednesday and they produced another resilient display to beat Diego Simeone's men on their own turf for the first time since their meeting at the Vicente Calderon in November 2016.

Atletico conceded twice in a first half at the Wanda for the first time, as Sergio Ramos' penalty added to Casemiro's spectacular opener after Antoine Griezmann had equalised, with a little thanks to VAR.

Madrid looked in control at the back under pressure in the second half and finished off their opponents 16 minutes from time through substitute Bale's landmark goal, before Thomas Partey's late sending off.

A fluid Madrid looked bright in the early stages and deservedly went ahead 16 minutes in – Casemiro producing a brilliant bicycle kick to beat Jan Oblak after Ramos nudged the ball on from a corner.

But Ramos restored the lead just before the break, confidently dispatching a penalty into the bottom-left corner after Jose Gimenez clumsily tripped Vinicius, with VAR adjudging it to have happened just inside the box.

Atletico thought they had equalised when Alvaro Morata lifted the ball over Courtois and into the net in the 54th minute, but VAR proved he was marginally offside.

And Madrid took full advantage in the 74th minute, as Bale – who replaced Vinicius before the hour mark – raced on to Luka Modric's pass and fired across Oblak into the bottom-right corner.

What does it mean? Madrid finding their stride – Barca beware

Not only did Madrid deserve their victory, the manner of the win was particularly impressive. At times, Atletico looked rattled and frustrated, a rare sight in LaLiga. Santiago Solari's side could yet end the weekend eight points adrift of Barca, who take on Athletic Bilbao on Sunday, but they are finding form at the right time. A late title surge could still be on.

His cameo against Barca on Wednesday was full of errors, but Casemiro was exceptional at the Wanda, tirelessly battling away in midfield and even getting a stunning goal to start things off.

An early flashpoint saw Gimenez give Vinicius a dressing down after feeling he had gone to ground easily in the area, even though the Brazilian did not appeal for a penalty. A little later, the winger left Atletico's centre-back in his wake and then lured him into giving away a spot-kick. It was a day to forget for the defender.

Atletico have another Madrid derby coming up next Saturday when they travel to Rayo Vallecano. Solari's men welcome Girona the next day, following a trip to Ajax in the Champions League on Wednesday.