Reus out of Dortmund v Hoffenheim as Favre is laid low 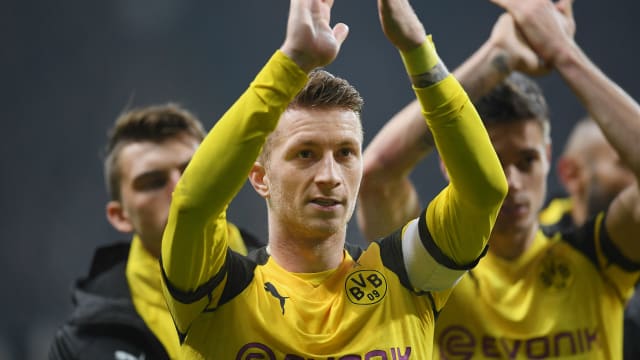 The Germany forward sustained a thigh injury during Tuesday's DFB-Pokal thriller against Werder Bremen – Dortmund losing 4-2 on penalties after a 3-3 draw that entered extra time with the score 1-1.

Reus netted a free-kick on the stroke of half-time in that game but Dortmund sporting director Michael Zorc confirmed at a news conference on Friday that he must undergo rehabilitation.

"Marco Reus suffered a muscle injury on Tuesday and will not be able to play," he said.

Zorc held the news conference in the absence of Lucien Favre. The head coach is laid low with flu and might not take his place on the bench against Hoffenheim.

Zorc presser ahead of #BVBTSG:

"Marco Reus suffered a muscle injury on Tuesday and will not be able to play tomorrow." pic.twitter.com/YhcnHkd0So

Defenders Lukasz Piszczek and Marcel Schmelzer, and winger Jadon Sancho will be assessed as they battle fitness issues of their own.

"We hope that Lukasz Piszczek will be able to train today," Zorc said.

"We have to wait and see if they will make the starting line-up. It's going to be a game-day decision."

Dortmund lead Bayern Munich by seven points at the summit and extended their advantage last Saturday despite a draw at Eintracht Frankfurt, as Niko Kovac's side went down 3-1 at Bayer Leverkusen.

Hoffenheim sit eighth, some way short of the form that saw them qualify for this season's Champions League, but Zorc is convinced another tough test awaits.

"Hoffenheim are a solid defensive team but also manage a smart offensive style of play," he added. "They are physically strong and dangerous in the second half."