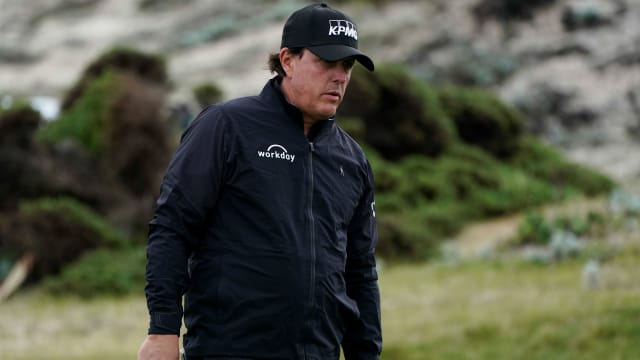 Phil Mickelson and Jordan Spieth were among five players tied for the lead when the second round of the AT&T Pebble Beach Pro-Am was suspended due to inclement weather.

It was crowded at the top of the leaderboard before the rain hit on Friday, with Mickelson, Lucas Glover, Scott Langley, Paul Casey and Spieth all 10 under.

Mickelson signed off on a four-under-par 68, while Glover (66), Langley (69) and Casey (64) were able to complete their second rounds, however Spieth was through 16 when officials halted proceedings.

Former world number one Spieth was five under after 16 holes at the time as the American star – without a PGA Tour victory since 2017 – prepares to complete his second round on Saturday.

Play at the @ATTProAm has been suspended.

Four-time Pebble Beach champion Mickelson, who hit all 13 fairways for the first time since 1998 on Thursday, was one shot off the pace at the end of the opening round.

But the five-time major champion recovered from three consecutive bogeys to birdie the last and earn a share of the lead.

A beautiful hole.
A beautiful shot. @PhilMickelson has 12 birdies in 30 holes.

He holds the solo lead @ATTProAm.#LiveUnderParpic.twitter.com/sWFmS1jbnW

Australian Jason Day is a shot behind after completing 15 holes of his second round, while Scott Piercy (through 15) ended the day at eight under.

Meanwhile, defending champion Ted Potter Jr was languishing in 153rd position at 12 under overall through 17 holes.