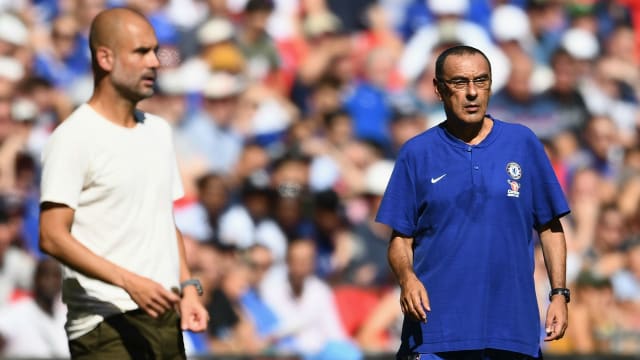 Maurizio Sarri lauded Manchester City as "the best team in Europe" as he challenged Chelsea to close the gap on the reigning Premier League champions.

City returned to the top of the table on Wednesday thanks to a 2-0 win at Everton, lifting them above Liverpool – who do still have a game in hand – on goal difference.

Pep Guardiola's men won the title at a canter last season and even though Liverpool are giving them a run for their money this term, Sarri still thinks City are a level above.

Yet the former Napoli boss does not believe it is impossible to make up ground on City, both on and off the pitch, as he prepares to take his team to the Etihad Stadium on Sunday.

Previewing Sunday's game at Man City, Maurizio Sarri will be speaking to the media at Cobham later today (1pm UK), and you can watch live... #MCICHE

When asked if he feels Chelsea can be as good as City, Sarri told reporters on Friday: "I think so.

"We need to work. You be more competitive in the market or you work in another way. We must work to reduce the gap, because at the moment there is a gap.

"At the moment we can fight for the top four, but no more this season. We can win something of course, but in the Premier League there is a fight [only] between Liverpool and City [for the title]

"At the moment, in my opinion, City is the best team in Europe. I think they are an example to every club."