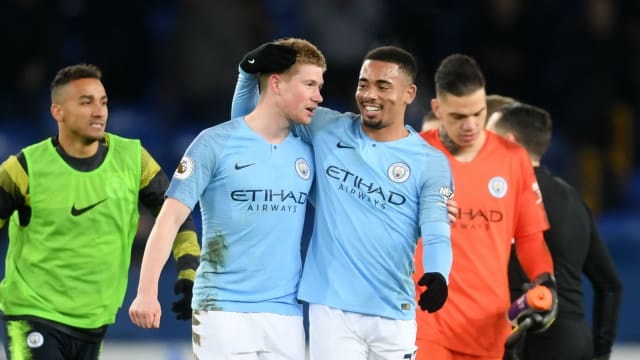 Kevin De Bruyne is not certain to regain his starting place when Manchester City host Chelsea this weekend.

De Bruyne was City's player of the season last term as they won the EFL Cup and stormed to Premier League glory with a 100-point haul.

The Belgium midfielder was struck down by a pair of medial knee ligament injuries this time around before stepping up his first-team involvement over the past six weeks.

Guardiola opted to leave De Bruyne among the substitutes for Wednesday's trip to Everton and, although the 27-year-old came on for an assured late cameo and set up Gabriel Jesus' game-clinching goal in a 2-0 win, he might have to be content with starting on the bench once more against Maurizio Sarri's men.

"In the end we judge the players for absolutely who we believe they are, but there are top forms and there are moments when you are not in better condition.

"There are moments when the other team-mates are in better conditions than them. In football what you have done is the past, you have to do it again."

Fight until the end!   pic.twitter.com/YlpVwdYzK6

Nevertheless, De Bruyne's Goodison Park contribution did not go unnoticed to Guardiola, who conceded managing the player's workload remains in his thoughts following an injury-wrecked period.

"We try to control the players. He played the previous two games, I preferred at Everton [for him to play a] few minutes," he explained.

"What I want from Kevin is to play the last five minutes he played as much as possible. He went out for five minutes, plus the extra time, and he was incredible.

"I want him to sustain that for a long time. I didn’t want him [playing] games, games, games and Gundo [Ilkay Gundogan] has been on top form."

The victory at Everton moved City back to the top of the Premier League for the first time since December on goal difference, although they have now played a game more than nearest rivals Liverpool and Tottenham.