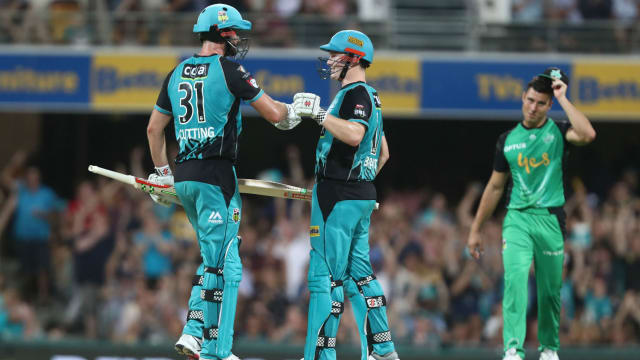 Max Bryant and Ben Cutting starred with the bat as Brisbane Heat thrashed Melbourne Stars by 10 wickets on Friday, a result that sees them leapfrog their opponents in the Big Bash League standings.

The Stars - who sat in fourth place prior to proceedings at the Gabba - posted 156-8 after being put into bat, Marcus Stoinis leading the way with 81 at the top of the order.

However, Brisbane openers Bryant and Cutting – who finished unbeaten on 71 and 81 respectively - combined to produce a devastating display of clean hitting, rushing their team to victory by the halfway stage of their reply.

The emphatic result keeps the Heat alive in the fight to make the semi-finals, with their net run-rate receiving a huge boost.

Sydney Thunder are also still in contention - they require a landslide triumph over Hobart Hurricanes on Saturday to have any hope of qualifying - while the Stars face the Sydney Sixers in their final fixture in the group stage.

CUTTING THROUGH THE BOWLERS

Brisbane made the chase a formality thanks to a record-breaking powerplay that saw them score 94 runs from the opening six overs.

Cutting reached his half-century from just 17 deliveries - the second fastest in BBL history, with Chris Gayle (12 balls) holding the record - as he hit eight sixes in a career-best score. In contrast, Melbourne managed just four maximums in their entire innings.

Bryant was hardly a slouch in reaching his personal landmark, getting to 50 in 20 balls. He finished the match in style too, launching spinner Sandeep Lamichhane for six over long-on at the end of the 10th over.

The duo combined to hit 13 sixes and 10 fours as they faced 30 deliveries apiece; the solitary disappointment for the Brisbane crowd was Brendon McCullum not making it out to the middle in his final home game for the team before he retires from BBL duty at the end of the season.

Stoinis, who conceded 24 in his solitary over with the ball, saw his innings overshadowed by the Brisbane pair, with the all-rounder the only Melbourne batsman to get on top of their hosts in an otherwise below-par total.

A slip when turning for a second run scuppered his hopes of reaching a century - Alex Ross' throw dismissing Stoinis in the 18th over - as Brisbane managed to claim wickets throughout to check their opponents' progress.

Josh Lalor finished with 3-43, including dismissing Peter Handscomb and Glenn Maxwell, who provided a return catch off a leading edge, in the final over of the powerplay.

Dwayne Bravo contributed 21 before he became the second run-out victim of the innings, albeit the faltering Stars still remain in the race to qualify for the semi-finals.