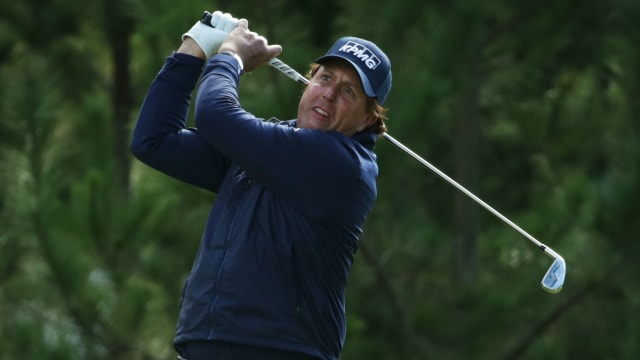 Brian Gay and Scott Langley are tied atop the AT&T Pebble Beach Pro-Am leaderboard after round one, but Phil Mickelson stole the show on the fairway.

Mickelson is in a six-way tie for third place following his memorable 65, which saw the American star hit every single fairway for the first time since 1998.

Five-time major champion Mickelson started his round with a birdie on the par-four first hole. He made a bogey and another birdie before the turn.

It's the first time since 1998 that @PhilMickelson has hit every fairway in a round. #LiveUnderParpic.twitter.com/goOogN1wgF

"To the best of my knowledge it's taken me 27 years and a few months to hit all fairways in a single round in a competition," said Mickelson, who initially believed it was the first time he had accomplished the feat. "I may have done it before but I don't ever recall doing it."

Dustin Johnson and Jordan Spieth round out the top 10 in a sizeable tie for ninth place following their 66s, which left the pair two strokes off the pace.

Johnson had six birdies and a bogey to be within touching distance, while Spieth – seeking his first title since 2017 – managed seven birdies and two bogeys following a flawless back nine.

"I'm really happy about the back nine. The putts went in instead of missing," Spieth said.