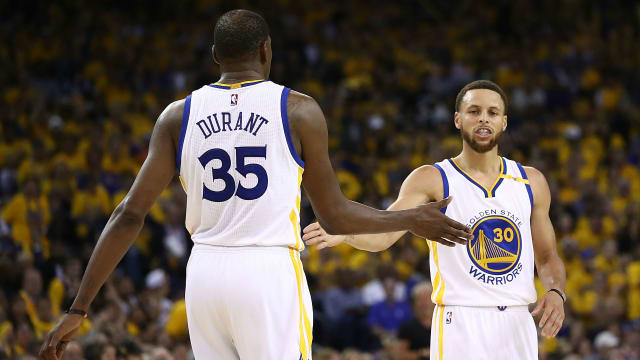 Stephen Curry has defended Golden State Warriors team-mate Kevin Durant after a rant at the media, saying the forward is right to want to focus on his basketball.

Durant scored 23 points in the Warriors' 141-102 win over the San Antonio Spurs on Wednesday before facing reporters.

But amid continued links with a move to the New York Knicks as free agency looms, Durant was irked by repeated questions on the matter and told one journalist to "grow up".

It had been put to the Golden State star that the Knicks now had cap space after they sent Kristaps Porzingis to the Dallas Mavericks as part of a seven-player trade last week.

Yet Curry had no issue with Durant's response, believing his team-mate simply wants to set the speculation aside and concentrate on matters on the court.

"Honestly, I think it's him not being able to control his own voice," Curry told reporters. "He's focused on basketball and that's what he should do.

"We want to see that KD every day. What he can't control is stuff that happens in the media or people making the decision for him or all this other stuff.

"In terms of him just playing basketball, focusing on what happens out there on the 94 feet, being there for us as team-mates, and us being there for him, that's what he can control. And I think he's doing a great job of that.

"All that other stuff - I wouldn't call it a distraction, but from his standpoint - is frustrating. The way he plays basketball and the way he is as a team-mate and all that type of stuff, that's all we’re worried about."

Durant has helped the Warriors to two NBA titles since moving from the Oklahoma City Thunder in 2016.