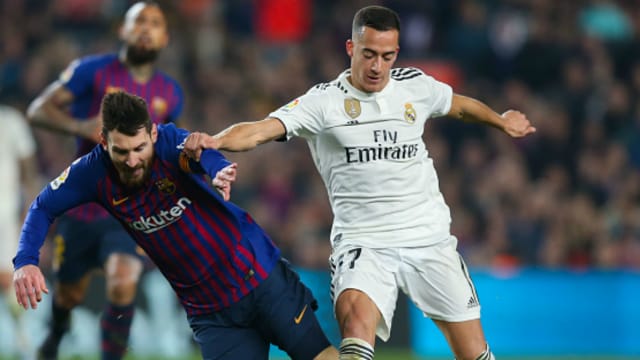 Lucas Vazquez believes Real Madrid deserved more from their Clasico draw with Barcelona in the opening leg of the Copa del Rey semi-finals.

Vazquez opened the scoring in Madrid's 1-1 draw away to bitter rivals and LaLiga champions Barca at Camp Nou on Wednesday.

Madrid took the lead in the sixth minute when Vazquez flicked the ball beyond Marc-Andre ter Stegen, though Malcom equalised in the second half to earn a draw for Barca.

The semi-final tie is now evenly poised heading to the Santiago Bernabeu for the return fixture on February 27 and Madrid forward Vazquez was not completely satisfied post-match.

Click on the photo to watch all the highlights of the match and the goal from @Lucasvazquez91!

"It's a bitter-sweet feeling because the team deserved more," Vazquez told reporters. "I'm thrilled to have got the goal and helped the team but we lacked that little bit to go on and win it.

"I'll take away our efforts for 90 minutes because everyone ran hard and worked with real intensity, both up front and at the back, and that's the secret to this group. We have to keep it up.

"We'd planned a match where we'd press high up and win the ball back in their half, and we did just that, especially before half-time. Every player is extremely committed, we're all pulling in the same direction.

"Towards the end we had a couple of great chances to make it 1-2 but it wasn't to be. The tie is wide open and it'll be a hard-fought game next time out. We will be going all out for a win at the Bernabeu in front of our fans. All together we'll push to seal a place in the final."

Goalkeeper Keylor Navas was in Madrid's starting XI midweek as number one Thibaut Courtois dropped to the bench.

Navas, who impressed against Barca, added: "Both sides had chances, we both took control of the game for different spells. Ultimately 1-1 doesn't feel so great because we wanted to win it but it's a fair result from what was a tight game.

"I thank God for giving me the strength, desire and motivation. I always say it's my friends, my wife and my kids who make me come out, enjoy myself and give it my all for this shirt. It's a privilege to be out on the pitch and I have to make the most of it.

"We knew we had to score, to win you have to score goals. We got one and we hope it’s enough, if we keep a clean sheet at home, we could be in the final. It'll not be easy."