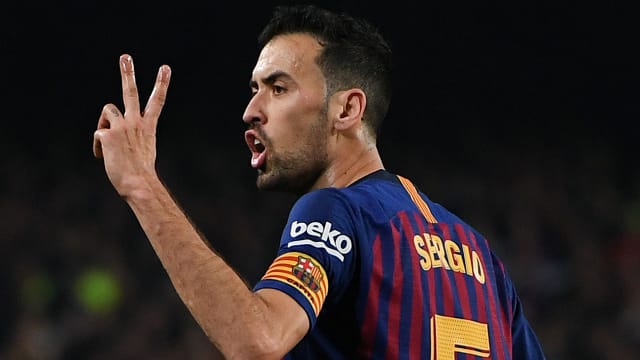 Sergio Busquets felt Wednesday's 1-1 Copa del Rey draw between Barcelona and Real Madrid was a fair result between "the best two teams in Spain and Europe".

Lucas Vazquez put the visitors ahead after just six minutes of the semi-final first leg at Camp Nou, but Malcom struck in the second half to ensure the scores are level at the midway point of the tie.

There was little to split the teams, with each managing 11 shots and Barca edging possession by 14 per cent, although Madrid return to the Santiago Bernabeu with the slight advantage of an away goal.

Busquets believes the draw was the right result, saying after the match: "In general terms, the draw is fair. It was an equal game. Everything will be decided in the second leg.

"There were enough chances for anyone to take the game. It's still 50-50, although we play at their home.

"There are no favourites in these games. We're the best two teams in Spain and Europe."

There are still 90 minutes left.
Come on lads! pic.twitter.com/qPnmqcYZDc

Madrid goalkeeper Keylor Navas agreed, saying: "It was a good game. All the players suffered when they had to. Both want to be in the final and we want to do things better to achieve that.

"We both had chances."

Malcom's goal was only his third for Barca since his arrival from Bordeaux in a €42million deal last July.

Busquets hopes the Brazilian has been given a boost as he looks to force his way into Ernesto Valverde's regular first-team plans.

"A goal gives you a lot in terms of confidence," said the midfielder. "We hope everyone helps and the coach will decide."