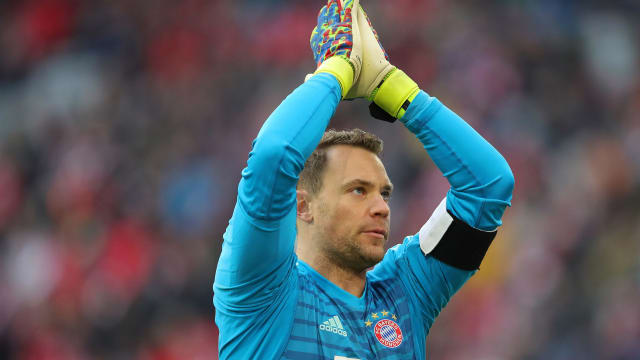 Manuel Neuer has been included in Bayern Munich's travelling party for the DFB-Pokal tie away to Hertha Berlin, the Bundesliga champions have confirmed.

Bayern's captain missed their weekend defeat at Bayer Leverkusen due to a hand injury sustained in training, with reports in Germany claiming he could be ruled out for up to three months.

But Neuer has made a swift recovery and will travel to Berlin with the rest of the squad after coach Niko Kovac suggested the goalkeeper could be available for the game in his pre-match news conference.

Thiago Alcantara and Franck Ribery will also travel but Corentin Tolisso, Arjen Robben and Renato Sanches are not available and have stayed in Munich.

Team news!  @Manuel_Neuer, @Thiago6 and @FranckRibery are all in the squad and making the journey to Berlin

Bayern take on Hertha on Wednesday with Kovac's men seeking to book a place in the quarter-finals of the DFB-Pokal, a tournament the club last won in 2015-16.

They lost last year's final to Kovac's Eintracht Frankfurt side before he left the club to take charge at the Allianz Arena.