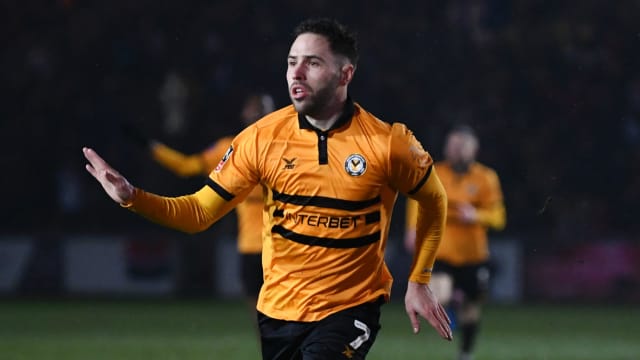 Newport County knocked Middlesbrough out of the FA Cup to set up a fifth-round tie at home to Premier League champions Manchester City.

Boro boss Tony Pulis endured a miserable return to Newport as his Championship promotion hopefuls were beaten 2-0 in Tuesday's replay by the League Two side.

In heavy rain at Rodney Parade, Robbie Willmott opened the scoring for Newport with a long-range strike that Boro goalkeeper Dimitrios Konstantopoulos should have kept out.

But there was nothing the 40-year-old Greek could do about the clincher as a right-wing corner routine produced a stunning second Newport goal.

Willmott's low delivery fooled the Boro defence and Padraig Amond met the ball with a superb first-time finish that sent the ball spinning into the top corner for his fourth FA Cup goal of the season.

| Straight from the training ground! pic.twitter.com/JDctKtMkwk

Newport took Tottenham to a fourth-round replay last season and Michael Flynn's side now have a date with City to look forward to later this month.

Wolves had to come from behind at Shrewsbury Town to force a replay and they were again pushed hard by the League One strugglers in the Molineux return.

Matt Doherty's second-minute goal opened the scoring but goals from James Bolton and Josh Laurent put Shrewsbury in front in the tie once more.

Doherty levelled in first-half added time, though, and Wolves edged through 3-2 thanks to a winning goal in the 62nd minute that was made by Doherty and scored by Ivan Cavaleiro.

Second-half goals from Nahki Wells and Matt Smith earned Queens Park Rangers a 2-0 home win over Portsmouth, while Brentford prevailed 3-1 against Barnet in the battle of the Bees.

Last-16 ties will be played over the weekend of February 15 to 18, with Chelsea hosting Manchester United in a repeat of last year's final in the tie of the round.