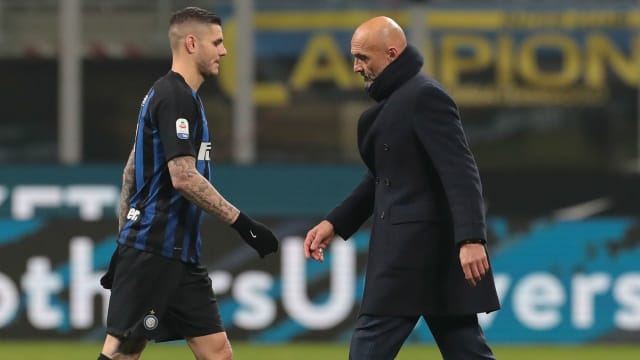 Luciano Spalletti's position as Inter coach is "very secure" despite the team failing to win any of their last four matches, according to club CEO Giuseppe Marotta.

Inter lost 1-0 at home to Bologna on Sunday, meaning they have failed to win any of their last three games in Serie A to sit 11 points behind second-placed Napoli in the table.

They also exited the Coppa Italia last week, losing on penalties to Lazio after a 1-1 draw at San Siro, and the recent poor run has seen the pressure increase on Spalletti.

Marotta insists Spalletti is safe, however, reassuring him about potentially losing his job any time soon.

"There was a discussion after the match against Bologna, but this is something we normally do after every match, irrespective of the result," Marotta told Sky Sport Italia.

"We recognise that we're going through a difficult spell, something which creates disappointment and unease, especially for our supporters, but Spalletti's position is very secure.

How @23_Frog looked back on the match yesterday
@Inter_TV
#InterBolognapic.twitter.com/lH2CrApuRG

"We are in a transitional period of the season; there are 16 matches left to play and we are in third place.

"It's true, that our form has been in a downward spiral, but we can count on a strong club, a competitive squad, a very capable coach and a fanbase that has always provided us with support, therefore I'm sure that we'll get out of this rut.

Inter's recent woes have resulted in some supporters making their displeasure heard with jeers aimed at the team, but Marotta says such behaviour only demonstrates a clear passion for the club.

"Jeers from fans are a show of love when things are not going well," he added. "All of us - and that includes the players - have to understand the mentality of those who come to the stadium to be close to the squad.

"Beyond the love they feel for our colours, it's normal that our fans want to see our team win. We can improve, and the improvement must be accompanied by a winning mentality.

"Our objective is to qualify for the Champions League. We should believe more in our qualities and find the right consistency. I'm convinced that Spalletti, who knows how to handle difficult situations like this, will be able to get us out of this situation."