Belichick thanks Patriots fans for making stadium 'like a home game' 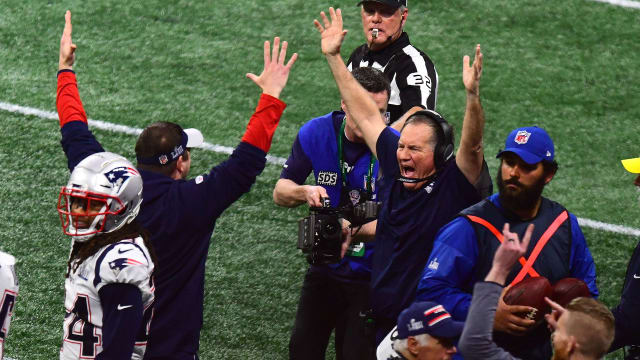 New England Patriots fans made their presence felt in Mercedes-Benz Stadium during Super Bowl LIII and it did not go unnoticed by Bill Belichick.

By some estimates, three quarters or more of the fans at the game in Atlanta were cheering for New England.

Following his side's 13-3 victory over the Los Angeles Rams, Patriots head coach Belichick said the team benefited from the support.

"I want to thank and recognise our fans that came to the game," Belichick said at a media conference on Monday. "We certainly felt their support there in the stadium. It was sorta like a home game almost, which is not the feeling you usually get at a Super Bowl, but was great to have."

Belichick now boasts six Super Bowl successes and three in the last five years, but he deftly side-stepped a reporter's question asking for his thoughts on being compared to NFL coaching legends such as Curly Lambeau and Vince Lombardi.

"It's incredibly flattering," Belichick said. "But really, for me, it's about what the team accomplishes, and the most important thing for me is for our team to be able to hold that Lombardi Trophy up and say we were champions.

"It took everybody, it took the entire team and organisation to put forth a superior and supreme effort to achieve that.

"That's really what it's about, it's about how all of us came together and kind of pulled our weight so the team could achieve its goals."

Belichick praised receiver Julian Edelman on his Super Bowl MVP performance (10 catches, 141 yards), and recalled how the team's scouts had targeted the former Kent State quarterback for his competitiveness and elusiveness, even if they were not sure where to play him.

The Pats chose Edelman in the seventh round of the 2009 NFL Draft. Belichick likened him to former Patriots greats such as receiver Troy Brown and linebacker Mike Vrabel (now the Titans head coach).

"I just can't say enough about our football team," Belichick said. "Certainly, Julian epitomises the work ethic, toughness, mental toughness, physical toughness, determination, will and extraordinary ability to perform under pressure. We have so many guys that do that well, do it in so many different ways."

"Julian did a great job for us, but we had 45 other guys out there last night battling, as well as the coaching staff. It's what we were able to accomplish as a team that makes me the most proud."