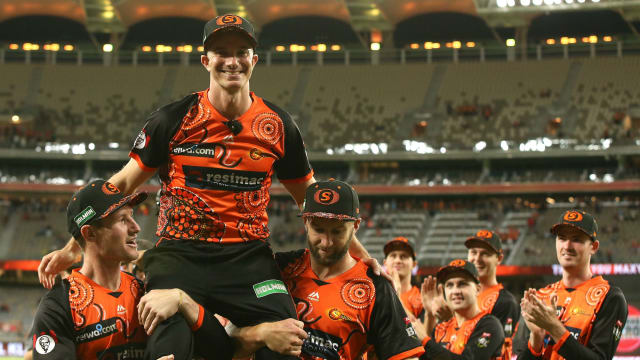 Ashton Turner's brilliant half-century ensured Michael Klinger was on the winning side in his final home match for Perth Scorchers, who triumphed by 27 runs against Melbourne Stars.

Veteran opening batsman Klinger this week announced he will retire from the Big Bash League at the end of this season, and he made 30 on Sunday to move back above Chris Lynn at the top of the all-time run-scoring list for the competition.

The Perth captain sliced to deep extra cover off Liam Plunkett to depart at the start of the 12th over, but Turner made 69 off 42 deliveries to help lift the Scorchers from 82-2 to 182-3.

Turner struck seven fours and three maximums as he established a pivotal 87-run union with Cameron Bancroft (44 not out), with the Stars failing to get anywhere near the target in their 20 overs at Optus Stadium, finishing on 155-9.

Klinger received a standing ovation from the adoring crowd as he made his way off the field after falling to Plunkett.

The 38-year-old returned to celebrate later on and was carried off through a guard of honour on the shoulders of team-mates Bancroft and Andrew Tye.

A fitting farewell for a fan favourite here in Perth #BBL08pic.twitter.com/BEAX6QBEYy

HOLING OUT TO HOBSON

The Stars looked in trouble when Nathan Coulter-Nile (3-30) removed Ben Dunk and Peter Handscomb, both falling for two to leave the visitors on 11-2.

However, Glenn Maxwell launched a stunning counter-attack alongside Marcus Stoinis (49), the former blasting three sixes as he made 61 to give the Stars hope.

Maxwell eventually fell to Tye (2-36), Nick Hobson running around from deep-backward square leg to take an excellent catch on the slide, while Stoinis was dismissed just two balls later.

OUT! Brilliant catch from Nick Hobson and that is a massive, massive wicket for the Scorchers@BKTtires | #BBL08pic.twitter.com/ng2UMiK8xJ

Nic Maddinson launched a gigantic 103-metre six off Tye that sailed up to the back of the second tier at the stadium.

However, Matthew Kelly (3-31) and Coulter-Nile held their nerve for the Scorchers, claiming four wickets in the final three overs to leave the Stars waiting to claim their place in the semi-finals.