Root calls for individuals to take responsibility after Windies humiliation 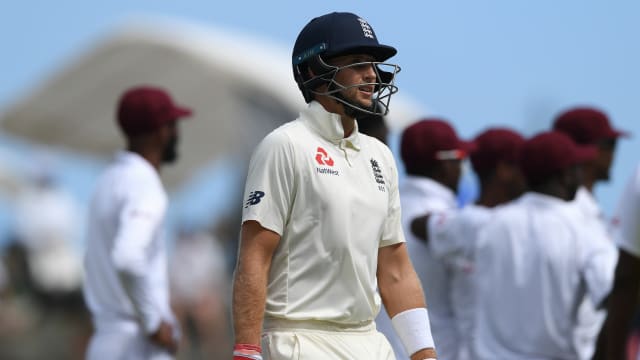 The Windies claimed the series by moving 2-0 up with just one game to play after a 10-wicket battering of Root's men inside three days on Saturday.

Having made just 187 in the first innings, England collapsed from 35-0 to 132 all out in the second and captain Root acknowledged the experienced players in the team fell significantly short in Antigua.

"Scoring under 200 in both innings isn't going to win you many games of cricket, so we've got to go away, learn from it and come back stronger for it," Root said.

"We just haven't scored enough runs. When experienced players aren't making scores over 50 it makes it very difficult for the rest of the guys around them.

"I think we have got to be better at what we do, or maybe do things slightly differently. The choice comes down to the individual. I can't bat for 11 guys, neither can [head coach] Trevor [Bayliss] or [batting coach] Ramps [Mark Ramprakash].

"There were a couple of disappointing dismissals that guys will have to look at individually, so we go about things maybe slightly differently in future.

"The responsibility is down to the individual, but we will stick together and work on it as a group and try and come back with a really strong response in the next Test."

Bayliss lamented the poor showing with the bat, while praising the Windies' bowling performance, but is confident England can play themselves into form ahead of a home Ashes series with Australia this year.

"It was very poor - the batting followed on from the first game and we just didn't bat very well at all," said Bayliss, who saw England hammered by 381 runs in the first Test.

"It was a difficult wicket to bat on, but we have to find a way and we haven't done that in these two Tests and they did bowl extremely well.

"In Sri Lanka, the bounce of the ball went our way. In this series, it hasn't gone our way, but we have to be better than that.

"There's a lot of cricket to be played between now and the Ashes."