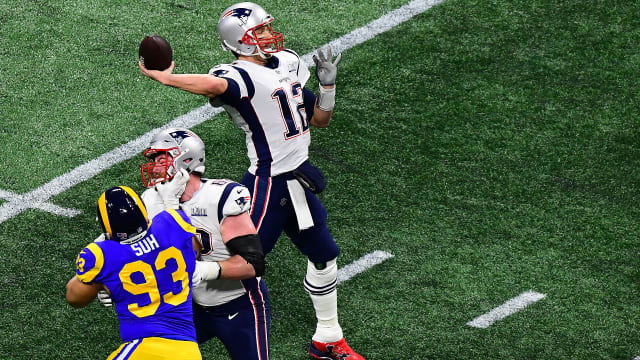 The New England Patriots are Super Bowl champions once again.

New England took home their latest title by pulling out a 13-3 win over the Los Angeles Rams at the Mercedes-Benz Stadium in Atlanta on Sunday. It was the lowest-scoring game in Super Bowl history.

Tom Brady completed 21 of his 35 passes for 262 yards with an interception in the victory. He and coach Bill Belichick have now won six championships together.

Here are 10 incredible stats from the Patriots' win, thanks to Opta.

2:08 – Brady was picked off on his first pass, which came two minutes, eight seconds into the game. It was the third fastest interception in a Super Bowl since 1996.

18 – Rob Gronkowski became the all-time leader in receptions by a tight end in Super Bowl history when he hauled in a 19-yard pass from Brady in the first quarter. It was his 18th career catch in a title game. He finished with 87 receiving yards against the Rams.

9 – The Patriots and Rams finished the first 15 minutes tied at 0-0. It was the ninth scoreless first quarter in Super Bowl history.

26 – The Rams tallied just 26 yards on the ground in the first half and finished with 62 in the loss. They averaged 139.4 rushing yards per game during the regular season.

7 – The Rams were the first team ever to punt on their first seven possessions of a Super Bowl.

11 – Patriots wide receiver Julian Edelman pulled in 10 catches for 141 yards in the victory. He became the 11th player ever to record six or more receptions in multiple Super Bowls.

3 – The Rams and Patriots combined for just three points through the first two quarters. It was the second-lowest scoring first half in Super Bowl history. The Pittsburgh Steelers held a 2-0 lead over the Minnesota Vikings at half-time in Super Bowl IX.

65 – Johnny Hekker tallied a 65-yard punt with 8:36 remaining in the third quarter. It was the longest punt in Super Bowl history.

2 – The Rams became just the second team ever to not score a touchdown in the Super Bowl. The 1971 Miami Dolphins were the first.

107 – Brady and Belichick are a combined 107 years old. That is the oldest QB-coach duo in Super Bowl history.