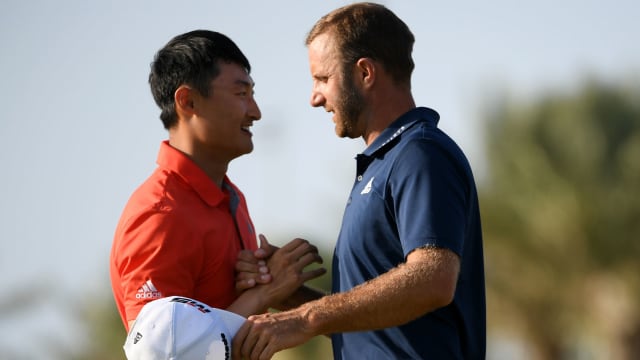 The two shared the lead heading into the final day's play, with Li having carded four eagles in a stunning third-round display at the Royal Greens Golf and Country Club.

It was on the back nine on Sunday that the Chinese saw his challenge fade, a run of three bogeys in five holes after the turn seeing the trophy slip from his reach.

Former world number one Johnson birdied the last two holes to finish 19-under par for the tournament and Li's gain at the last ensured he finished ahead of Tom Lewis, who started his round with five birdies on the bounce.

Johnson struck first in his tussle with Li, carding a birdie three at the second for the fourth round running, but his rival led by the turn after gains at the fourth and ninth.

Although both dropped a shot at the 10th, Johnson found it easier to shrug off that disappointment as he picked up shots on back-to-back holes immediately after, while Li followed up two pars with two further bogeys.

Trouble reared its head for the American when he found water at 16, but he showed his powers of recovery to escape with a bogey.

And Li could produce no repeat of Saturday's heroics, when he closed eagle-eagle to sign for a 62, with Johnson assured of the crown after Englishman Lewis' promising start fizzled out in a run of six pars from the 13th to the last.