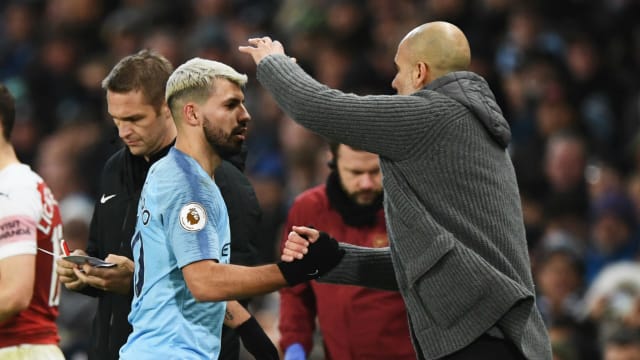 Having scored after 24 seconds in a losing effort at Newcastle United last time out, Aguero broke the deadlock 46 seconds at the Etihad Stadium on Sunday.

"Everybody knows about his [Aguero's] goals," the City manager told Sky Sports. "It's important how you fight, so I think he is incredible.

"I know it is not for his body to run like Gabriel [Jesus] or Bernardo [Silva] or the other ones, but he tried to do absolutely everything and that for the team will never be a problem for us.

"Of course he scores a lot of goals and in that way it is important."

10 - Sergio Aguero's hat-trick is his tenth in the Premier League for Manchester City; only Alan Shearer (11) has more in the competition's history. Magic. #MCIARSpic.twitter.com/Avmh184Z6J

Guardiola lamented City's lacklustre display in the 2-1 loss at St James' Park and he again underlined how difficult it can be for his side when they are not in their typical rhythm.

"It's important to realise what we have to do to win the games," he said.

"We are a good team when we go to the full gas, go and go for 90 minutes. But if we are not in that rhythm, a little bit slower, then we are not a good team.

"Hopefully that game [at Newcastle] will help us know it. We have spoken about it. We are good when we do what we have to do. After that, we can forget about it.

"We will arrive in the last stages fighting for the title. I had no doubts. I am not talking about winning or losing, I am talking about intensity, to go score another one, try get another goal.

"Against Newcastle we didn't do that and that's why we lost."

The reigning champions will now watch with interest when Jurgen Klopp's side take on West Ham on Monday.