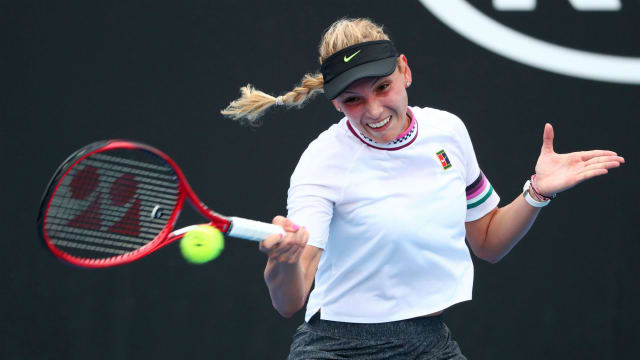 Donna Vekic followed up her shock defeat of defending champion Petra Kvitova by booking her place in the final at the St Petersburg Ladies Trophy on Saturday.

The world number 30 had stunned Australian Open finalist Kvitova 6-4 6-1 to reach the last four and she was again comfortable as her run continued.

Vekic eased past the unseeded Vera Zvonareva 6-2 6-2, breaking swiftly in both sets, and will now take on Kiki Bertens for the title on Sunday.

Second seed Bertens was made to work a little harder to secure her progression as Aryna Sabalenka took the first set to a tie-break and briefly led, yet it was the Dutch who then emerged a 7-6 (7-5) 6-2 victor.

"It was a really tough match," Bertens said. "[Sabalenka] is a really great player, who hits the ball really hard. I had to stay aggressive where I could. My coach was there at the end to calm me down a little."

Another Top 10 win for @kikibertens!

The Flying Dutchwoman books her place in the @Formula_TX final with a 7-6(5), 6-2 victory over Aryna Sabalenka! pic.twitter.com/Zc5Tg4mpZh

There were two more straight-sets victories in the semi-finals of the Thailand Open as Dayana Yastremska and Ajla Tomljanovic set up a final meeting.

Yastremska had upset Garbine Muguruza in the last eight and saw off Magda Linette 6-4 6-3, while Tomljanovic brushed aside Tamara Zidansek 6-4 6-1.