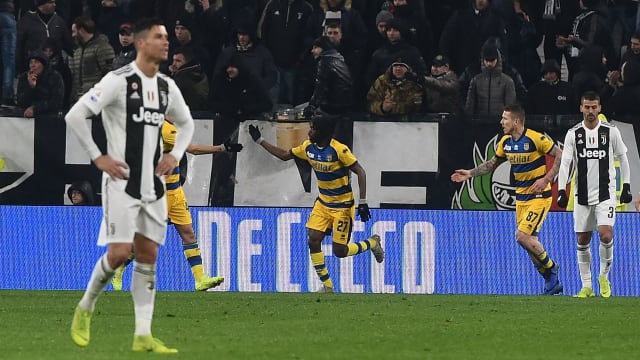 The visitors fought back from 3-1 down at the Allianz Stadium, where Cristiano Ronaldo scored twice and Daniele Rugani was also on target.

Antonino Barilla headed in for Parma before Gervinho came to the fore, cutting the deficit 16 minutes from time with a neat flick and then firing in a close-range leveller at the death.

With Napoli having won earlier on Saturday, Juve's lead is now nine points, bringing a disappointing week for Massimiliano Allegri's men to an end after Wednesday's 3-0 Coppa Italia loss to Atalanta.

FT: It finishes in a draw at the Allianz.#JuveParma#FinoAllaFine#ForzaJuvepic.twitter.com/MkZBoKr3bD

Juve went close to breaking the deadlock after the half-hour mark as Sami Khedira worked space to shoot inside the box only to see his strike rebound off the left upright.

They eventually forged ahead in the 36th minute, Ronaldo's deflected effort deceiving Luigi Sepe and nestling into the net.

Juve were awarded a penalty before the break when Martin Caceres and Simone Iacopini got tangled up, but it was correctly overturned by VAR.

Bruno Alves, who this week signed a new deal following speculation over a move to Juve, fired a free-kick over the crossbar early in the second half as Parma sought a route back into the contest.

Khedira again struck the woodwork after leaping to meet Ronaldo's cross but Rugani lashed home their second in the 62nd minute after the Portugal superstar's miscued header.

Barilla's response proved swift as he nodded in after Juraj Kucka provided the ammunition, but Ronaldo was not done and he grabbed his 17th top-flight goal of the season from Mario Mandzukic's delivery two minutes later.

What does it mean? Juve not invincible

While Juve's unbeaten record still stands in Serie A, the concession of six goals in the space of four days hints at some troubles for Allegri to address. The injury-enforced absences of Leonardo Bonucci and Giorgio Chiellini, as well as the January departure of Medhi Benatia, has left them short of options and experience at the back. With the Champions League on the agenda this month, the coach will want to find answers fast.

The former Arsenal forward had been largely anonymous for much of this contest, but he made an impact when it mattered most. Both finishes required a striker's instinct and Gervinho was not found wanting.

Juve's interest in 37-year-old Alves raised a few eyebrows despite their defensive injury crisis and he did not exactly serve up his best display in Turin, where the centre-back was rarely involved and yet careless in possession when he was.

Juve will aim to bounce back by completing the double over mid-table Sassuolo next Sunday, while Parma face another tough test when they host Inter the day before.