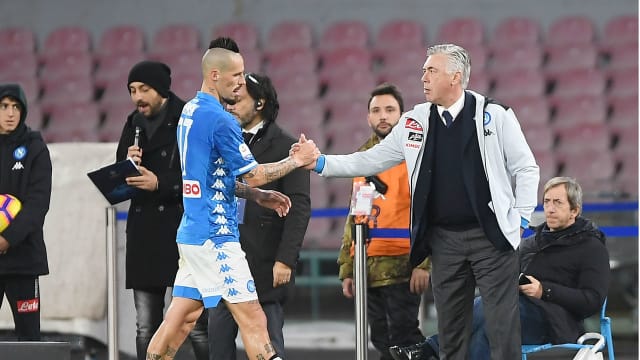 Marek Hamsik is on the verge of leaving Napoli, head coach Carlo Ancelotti has confirmed, with a move to China seemingly on the horizon.

Napoli captain Hamsik, who is the club's all-time leading goalscorer and appearance maker, has been linked with a move to the Chinese Super League for some time, with Dalian Yifang reportedly favourites to secure his signature.

And a move now looks to be edging closer, with Ancelotti confirming that Hamsik – who played 74 minutes of Napoli's 3-0 win over Sampdoria in Serie A on Saturday – wants to leave Stadio San Paolo.

"There are negotiations ongoing, we have to evaluate along with the player," Ancelotti told Sky Sport.

"The club has huge respect for this player, as he wrote history with Napoli, but if he wants to have another experience, we tend to want to make him happy.

"There are talks. We are not hiding anything. As far as I and the club are concerned, if the player wants to try this new experience, we are inclined to give him what he wants."

17 - Napoli are unbeaten in their last 17 home games in Serie A: a record among teams currently in the competition. Home.#NAPSAM#SerieApic.twitter.com/RkbdmdlJNc