Fowler in charge at Phoenix Open 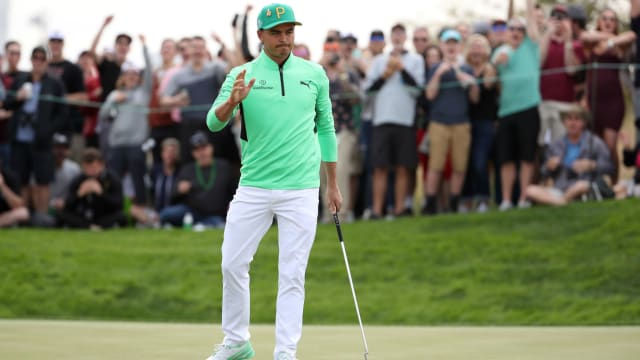 Rickie Fowler charged into a four-stroke lead at the Phoenix Open after firing a seven-under 64 in the third round on Saturday.

Fowler finished with eight birdies, five of which came on the front nine in Scottsdale, Arizona.

By the time he made the turn, he put just enough distance between himself and the rest of the pack, finishing the day at 20 under.

Matt Kuchar is in sole possession of second place at 16 under after shooting a six-under 65. Justin Thomas rounded out the top three a shot further back after he carded a 68.

Kuchar climbed three spots on the leaderboard after a mistake-free round highlighted by six birdies.

Thomas, however, was not as fortunate. He had two bogeys on the front nine which sandwiched one of his five birdies. He was able to edge out An Byeong-hun and Branden Grace – who are at 13 under – for third place and a spot in the final group on Sunday.

"I hit a very nice back nine to at least keep myself in it," Thomas said. "There's a good chance it might take something special for me tomorrow but I like the fact at least that I got my way in that final group and I'm going to know what [Rickie] is doing.

"Hopefully I can get off to a hot start and maybe put a little bit of heat on him."

An and Grace are tied for fourth place. An, who has yet to win on the PGA Tour, is in contention after shooting five-under 66. Grace had an eagle on the par-five 13th hole but three bogeys stained his scorecard. He finished with a 69.

Gary Woodland, last year's Phoenix Open champion, is in a two-way tie with Bubba Watson for sixth place at 12 under. Watson had three consecutive birdies on the front nine, but after the turn had two bogeys to go along with two more birdies. He carded a three-under 68.

Woodland was able to improve on his two-day total and move into the top 10.

"It was a nice finish. I played really well today," he said. "[I'm] just hoping Rickie wouldn't run too far away from us because tomorrow, hopefully, the golf course is softened up a little bit and we'll play aggressive. But I'm happy with where I'm at."