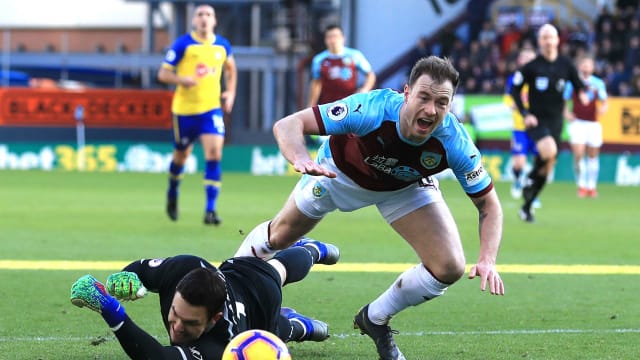 Sean Dyche has called on Premier League referees to improve their decision making after Burnley salvaged a 1-1 draw against Southampton.

Burnley should have had a penalty in the first half, when Alex McCarthy bundled into Barnes, who instead received a booking after displaying his frustration.

Refere Anthony Taylor showed little hesitation in pointing to the spot in stoppage time when Jack Stephens handled from Peter Crouch's header, but Dyche was unimpressed by the official's decision in the first half.

"We have had two games with big decisions go against us," Dyche told reporters.

"At last we get a penalty and it should have been two. It's impossible that it's not.

"I see some amazing penalties given in this league and I feel for Barnesy, who got booked for it. Thankfully he got his rewards.

"We need big decisions to be given, because we could have won all three games this week. We kept knocking on the door though and it was the least we deserved.

"Had we come away with nothing today you'd struggle to believe what was going on. The first decision baffles me."

The draw leaves Burnley and Southampton level on 24 points, clear of the relegation places, but Saints boss Ralph Hasenhuttl acknowledged his side must be mentally strong to recover from losing out on all three points, as they prepare to face fellow strugglers Cardiff City next time out.

"It feels a bit different this one. The 1-1 with Crystal Palace on Wednesday felt a success but this feels like losing," Hasenhuttl told BBC Sport.

"But I think it was a fair result. We had a few situations where we were lucky.

"We are unbeaten in five games which is important for me. We had a big chance but it's important to keep winning points consistently and that's what we are doing. It's important steps.