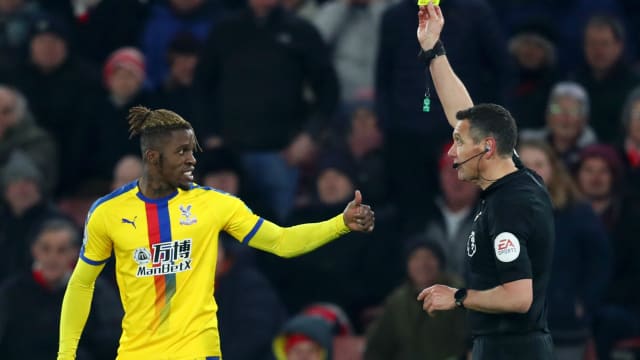 Crystal Palace winger Wilfried Zaha has been charged by the Football Association (FA) for his reaction to a red card against Southampton on Wednesday.

Zaha was sent off late in the second half of the 1-1 draw at St Mary's Stadium, having opened the scoring for Palace before the break.

The former Manchester United star clashed with Saints midfielder James Ward-Prowse to earn a first booking and then immediately received a second card for sarcastically applauding referee Andre Marriner, leading to his dismissal.

Zaha continued to make the gesture towards the official following the red card, showing his frustration as he departed the field.

And Palace's talisman has now been charged by the FA, as it is alleged "his behaviour following a second-half dismissal amounts to improper conduct".

Zaha has until February 5 to respond to the charge. He apologised for the incident on Twitter after the match.

Crystal Palace’s Wilfried Zaha has been charged following the game against Southampton yesterday [30 January 2019]. It is alleged his behaviour following a second-half dismissal amounts to improper conduct. The player has until 18:00 on 5 February 2019 to respond to the charge.