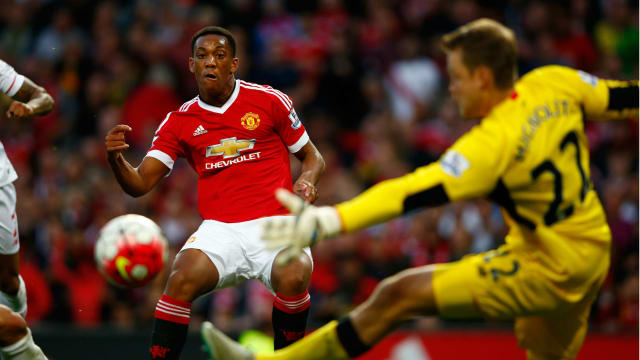 The recent feelgood factor around Manchester United was bolstered by Anthony Martial signing a new four-and-a-half-year contract on Thursday.

United made Martial the most expensive teenager in football history when they signed him from Monaco in 2015.

Although he had an instant impact, it has not always been plain sailing for the 23-year-old France international, but he is among a cluster of creative talents at Old Trafford who have appeared revitalised under caretaker manager Ole Gunnar Solskjaer.

Here, we look at Martial's highs and lows since joining the 20-time English champions.

There was a degree of "Anthony who?" flippancy after Louis van Gaal sanctioned the signing of Martial for an initial £36million. But he announced himself in style, coming off the bench to net a brilliant solo goal and crown a 3-1 win over bitter rivals Liverpool at a buoyant Old Trafford. A brace followed in his maiden start at Southampton next time out and the United faithful had a new hero.

Van Gaal's tenure wound to a close over the course of the sort of uneven season that has typified United since Alex Ferguson's reign. But the Red Devils did manage to lift the FA Cup with victory over Crystal Palace in the Dutchman's final game in charge. None of that would have been possible without Martial's scintillating injury-time winner against Everton in the semi-final.

Missing out on France's moment of glory

Martial's debut for Les Bleus arrived in the same week as his move to United but he has largely struggled to establish himself within a phenomenally talented generation. A solitary goal is his return from 18 caps and he missed out on a spot in Didier Deschamps' squad as France marched to World Cup glory in Russia last year.

Deschamps could reasonably argue he overlooked Martial because of his stalled progress at club level. He often appeared an uneasy fit with Jose Mourinho's idea of a wide attacker and only started 18 Premier League matches in each of the Portuguese's full seasons at United. The relationship reached a nadir when Mourinho criticised Martial for not returning to the club's pre-season tour following the birth of his second child last year and issued a fine.

Martial capped the clinical counter-attack that condemned Arsenal to a 3-1 defeat in the fourth round of the FA Cup earlier this month - a goal that seemed to underpin the sense of a club back in touch with its former self under Solskjaer. If this morale-boosting run is to become something more permanent, Martial has seemingly made sure he will be a key part of it.