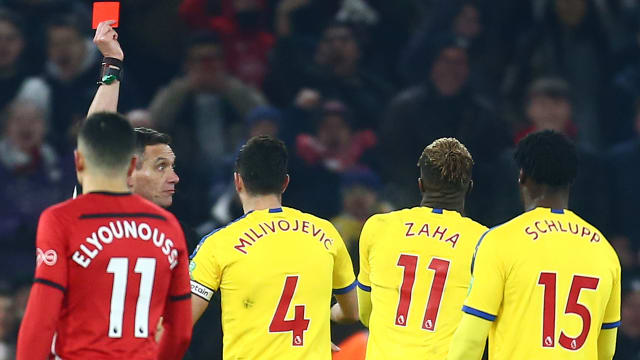 Crystal Palace attacker Wilfried Zaha apologised for getting sent off in his side's draw with Southampton on Wednesday.

Zaha had given Palace a first-half lead at St Mary's, but was sent off late after picking up two yellow cards in a minute, with James Ward-Prowse having earlier equalised.

The Ivory Coast international lashed out at Ward-Prowse to be booked before applauding referee Andre Marriner, leading to his second yellow card.

Zaha, 26, apologised after the game, as a draw pulled Palace four points clear of the relegation zone.

"All I can do is apologise to the team and the fans for my red card tonight because I could have cost us today," he wrote on Twitter.

"I will learn from it for sure."

All I can do is apologise to the team and the fans for my red card tonight because I could of cost us today. I will learn from it for sure #CPFCpic.twitter.com/b2VYCVk5Nx

Palace manager Roy Hodgson was frustrated by the red card, but said Marriner had no choice but to give Zaha a second yellow.

"It's disappointing that the player who perhaps provided some of the best entertainment during the 90 minutes with his performance was consistently fouled throughout the game [and] wasn't able to contain his frustration with that consistent fouling," he said.

"Protests over a foul which is not given which probably should have been, but then once he applauds the referee's decision to give him a yellow card the referee, under the rules of the game and the instructions they are given, he's got no option but to send him off.

"So, there's not much one can say about it."