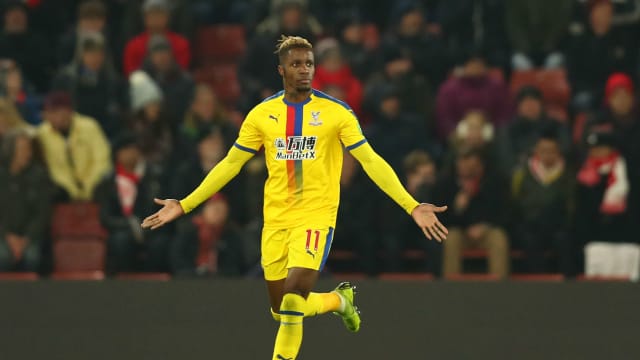 Wilfried Zaha received a late red card following an act of petulance as Southampton came from behind to draw 1-1 with fellow Premier League strugglers Crystal Palace.

Having ended his 17-game goalless drought to put Palace ahead in the first half, Zaha saw red for two bookings in quick succession in the 87th minute, when he reacted badly to a decision by Andre Marriner and sarcastically applauded the referee upon being booked.

James Ward-Prowse's third goal in as many league games had cancelled out Zaha's opener, with Mamadou Sakho missing two clear-cut chances either side of Southampton's 77th-minute equaliser.

Both sides now sit four points above the relegation zone, although Palace are set to lose their star man to suspension.

4 - Wilfried Zaha has scored more Premier League goals without netting at home than any other player this season. Travels. #SOUCRYpic.twitter.com/He6YAJUtE6

Southampton had the first chance – Pierre-Emile Hojbjerg forcing a smart stop out of Vicente Guaita after sloppy play from Sakho.

Jack Stephens was fortunate that his rash challenge on Andros Townsend went unpunished soon after, but Southampton's luck ran out when Zaha lashed home from the edge of the box four minutes before the interval.

Sakho should have made sure of the result for Palace with 16 minutes remaining, but Jan Bednarek managed to clear off the line, and Southampton emphasised the value of that block when a flowing move ended with Ward-Prowse hammering home from Matt Targett's cut-back.

Southampton were let off the hook by Sakho once more in the 84th minute, the defender failing to put away a free header from a corner, and Palace's frustration boiled over with Zaha receiving his marching orders. He initially lashed out at Ward-Prowse after being angered at not receiving a free-kick, then reacted furiously when he was shown a yellow card and continued to applaud Marriner as he left the field.

What does it mean? Saints' revival rolls on

Ralph Hasenhuttl faced a huge task when he took over at Southampton, but they now look a good bet to stay up and this point extended their unbeaten streak to four league games. Despite not replicating the energy they showed in their previous outing against Everton, the Saints did not give up.

Ward-Prowse to the rescue

The midfielder has been revitalised under Hasenhuttl and made no mistake with a coolly-taken first-time finish to secure what could be a crucial point.

Zaha goes from hero to zero

Palace relied heavily on Zaha for goals last term and the forward came up with the goods by scoring nine times in the league. Zaha has not been as prolific this season, but he took his first league goal since September in brilliant fashion, only to then ruin his performance with a moment of madness in the closing stages.

Southampton travel to in-form Burnley on Saturday, while Crystal Palace host Fulham – who beat Brighton and Hove Albion in remarkable fashion on Tuesday – in a London derby.