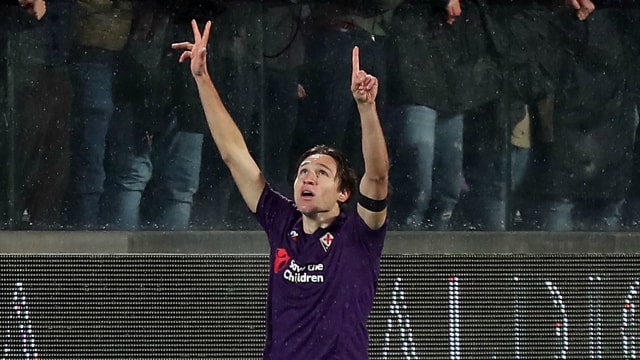 Giovanni Simeone came off the bench to score twice in the second half as Roma capitulated in Wednesday's tie, which included Edin Dzeko seeing red for Roma.

Luis Muriel and Marco Benassi were also on target to add to the growing pressure on Roma boss Eusebio Di Francesco.

Chiesa struck twice in the opening 18 minutes, turning in a Kevin Mirallas cross to open the scoring before racing on to the same team-mate's throughball to dink a chip over Robin Olsen.

Aleksandar Kolarov was caught out of position for Chiesa's second goal, but his typically powerful 20-yard drive reduced the deficit, only for Muriel to restore Fiorentina's two-goal cushion before the break.

Cristiano Biraghi set up Muriel and his finish took a deflection off former Sevilla team-mate Steven Nzonzi to beat Olsen for a third time.

Alban Lafont made a wonderful save to keep out Nicolo Zaniolo's close-range header and Fiorentina extended their lead further in the 66th minute.

Muriel set up Benassi for an excellent strike and Dzeko's red card for dissent added to Roma's misery, the striker dismissed for shouting in the face of referee Gianluca Manganiello.

Chiesa had hit braces in two of his last three games, but he went one better by claiming the match ball, thrashing past Olsen after beating the sleeping Kolarov to Benassi's pass.

Simeone lashed in six minutes after coming on to replace Muriel and in the last minute of the 90 he struck again to make the scoreline even more emphatic.

La Viola will now aim to reach the final for the first time since 2013-14, when they were beaten by Napoli, with a potential semi against holders Juventus up next.

7 - Roma have conceded 7 goals in the same match only for the 6th time in their history, the first time in Coppa Italia (the last was vs Bayern in 2014). Debacle. #FiorentinaRoma