Allegri: They were right to send me off 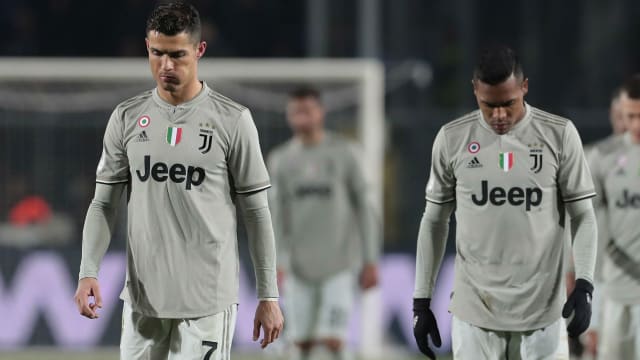 Massimiliano Allegri conceded his dismissal in Juventus' Coppa Italia quarter-final defeat to Atalanta was the correct decision as he stated his belief the result had been "in the air".

The Bianconeri suffered their first domestic loss of another excellent campaign on Wednesday, sensationally losing 3-0 as Allegri's men saw their hopes of a fifth successive Serie A and Coppa double undone by an Atalanta side playing some of the most exciting football in Europe under Gian Piero Gasperini.

Timothy Castagne opened the scoring for Atalanta and Duvan Zapata made it 2-0 six minutes before half-time, a goal that was followed by Allegri being sent to the stands after a heated exchange with the fourth official.

Zapata rounded things off with his second of the night and 20th of a superb season late on following a defensive mix-up, with Allegri accepting this performance had been coming after they needed a late fightback, which featured a Cristiano Ronaldo penalty, to beat Lazio at the weekend.

"They were right to send me off, as I was losing my temper at the time," Allegri told Rai Sport.

"This result was in the air for a while, frankly. We had players coming back from injuries, others who were out. You can recover one or two games from a negative situation, but you're going to lose eventually.

"It's nothing to get dramatic about, as it was just an off day. Atalanta fully deserved to go through and had more verve about them.

"It's disappointing for us to go out, but it was mad to think Juventus could've won every single match this season. We really gave some goals away tonight.

"I don't see it as any alarm bell to be worried about, because it is impossible to win every game. We wanted to win the Coppa Italia for the fifth time in a row, but Atalanta were very physical and aggressive, so congratulations to them.

"I think a lesson like this can be of use to a team. Last season, we drew with Crotone with a real struggle and then fell to Napoli. You rescue one, you rescue two, you're going to fall eventually.

"We were simply out of steam. It can happen after such a long successful run. We've got Parma on Saturday and they are really strong on the counter-attack too. Mario Mandzukic will be back on Saturday, Sami Khedira and Miralem Pjanic were back tonight. There are those who kept us afloat thus far."

Gasperini had a differing assessment, telling Rai Sport: "Something extraordinary happened this evening, seeing as even the most optimistic fan could not have foreseen such a victory.

"We met Juve quite a few times and only ever got draws, so it was tough to even hope for a 3-0 result. It's immensely satisfying, as doing this against Juventus gives it even more significance.

"I could not have asked for more and I don't just mean the result, but also the passion, the style of football, the quality. People think Atalanta just run hard and that's it, but there's more to it."

On Zapata, who has scored 17 goals in his last 10 games, he added: "He is a fantastic centre-forward and doing extraordinary things. If he continues like this, he'll be considered among the top strikers in Europe."