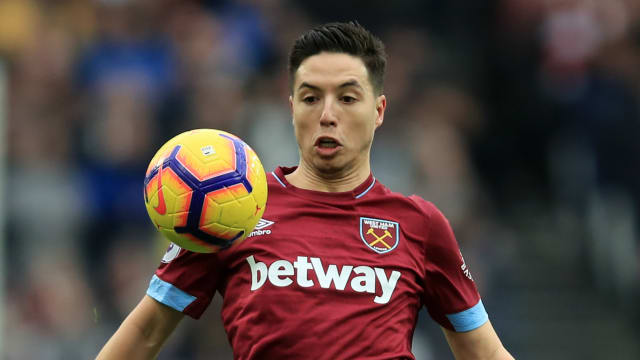 Samir Nasri insists he did not realise he was breaking any rules when he visited the Drip Doctors clinic for IV treatment.

Nasri served an 18-month ban after he was found to have violated UEFA's anti-doping regulations in 2016.

The midfielder, who posed for a now-infamous photograph at the clinic, was on loan at LaLiga side Sevilla from Manchester City at the time of the incident.

But Nasri continues to protest he did not know he was doing anything wrong when he underwent treatment during a break in Los Angeles.

"I was on holiday with my family. I became ill, I had a virus. I did not leave my room, I was suffering from vomiting, big headaches, I was empty," Nasri told L'Equipe.

"I called a friend and told him to find me a doctor. He couldn't. He said to me: 'There is a clinic, it will re-boost you'. Especially as I was going back to Sevilla in two days' time.

"I said okay. I didn't know the rules. And that, by the way, should serve as a lesson to all young players, to properly read the anti-doping rules, to really pay attention, because everything can go in a completely different direction.

Thank you and goodbye 2018. This year was bittersweet, you took away my first love but also taught me to never take what you do and love for granted, to value it every day. Finally i can say hello to 2019 a better all rounded, grounded and grateful person who is ready to be back doing what i love most week in week out. Thank you god for my second chance and thank you for reuniting me with my old manager Pellegrini and new club like West Ham. Thank you to all the fans who have supported me through a tough year. I hope to make you hammers proud and will give it my all!

"To be honest, I did not think that anything would come of it. This woman came to give me a drip of vitamins. She asked for a photo, I said yes, for me I hadn't done anything wrong. I was of the view that this was not a doping product, it was fine.

"Can I promise that I have never doped? Yes, I have handed over the files, there was no doping product in it."

Nasri joined West Ham after serving his suspension, with the former France international having so far made two Premier League appearances for the club.