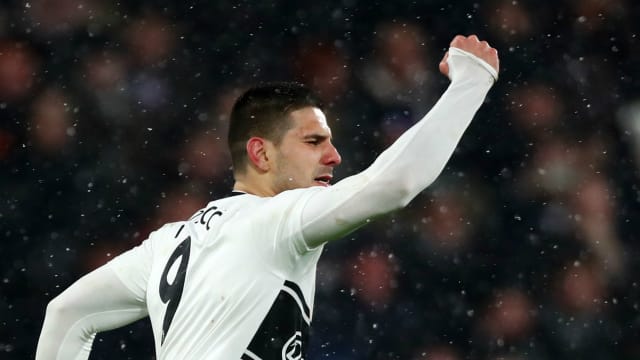 Glenn Murray's double gave Brighton a 2-0 lead inside 16 minutes as crosses from the Seagulls' right led to chances the striker gobbled up to reach 10 Premier League goals this season.

But, after Ranieri switched to a back four then brought on Luciano Vietto at half-time, Calum Chambers and then Mitrovic struck to draw the scores level.

Mitrovic put Fulham ahead after beating Lewis Dunk in the air and Vietto struck late to wrap up an amazing win, moving the Cottagers to within two points of third-bottom Cardiff City.

Fulham have conceded by far the most goals in the Premier League this season and it took Brighton fewer than three minutes to open the scoring with a remarkably simple strike.

Right-back Martin Montoya was allowed to run unchallenged before delivering a fine cross Murray steered home after getting between defenders Denis Odoi and Maxime Le Marchand.

Murray was on target again in the 16th minute. Odoi's poor clearance allowed Davy Propper to hook the ball back into the danger zone for the veteran striker to pounce from close range.

Either side of Propper rattling the crossbar Murray missed two chances to seal his hat-trick and surely kill the game.

But Chambers' stunning 20-yard volley gave Fulham a lifeline within two minutes of the restart and Mitrovic then hauled them level by showing the most desire to reach a deflected cross.

Seri hit the post but Sergio Rico had to make a brilliant save in the 72nd minute to deny Murray the match ball.

And when Joe Bryan floated a superb cross into the box from the left wing, Mitrovic dominated aerially for a second time to beat Mat Ryan with an excellent downward header.

Brighton were suddenly on the ropes and Vietto's first Premier League goal sealed matters, with Tom Cairney striking the bar as a once-improbable win threatened to grow in size.

What does it mean? Fulham finally have hope

Defensively Fulham were a shambles in the first half, but in Mitrovic they have a striker capable of firing the goals they need to stay in the Premier League. Brighton, meanwhile, are suddenly drifting under Chris Hughton with the Seagulls only winning one of their past nine in the league.

After 26 minutes of defensive disarray, Ranieri had seen enough and replaced Tim Ream with Cairney, switching to a back four. That change settled Fulham and, when half-time sub Vietto added thrust, they completed one of the season's most memorable comebacks.

Referee Lee Probert was in lenient mood and a harsher official perhaps would have shown two red cards in the first half. Dale Stephens clattered into Andre Schurrle shin but was only booked, with the same punishment given to Seri after his two-footed challenge on Montoya.

Fulham will try to maintain momentum at Crystal Palace on Saturday, when Brighton host Watford.