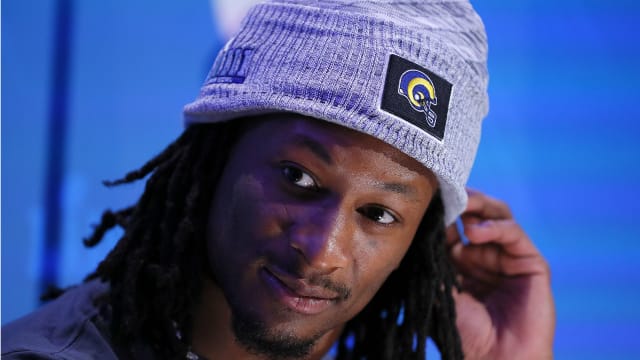 Los Angeles Rams star Todd Gurley is ready for the biggest game of his career.

The running back's health was a topic of speculation after he received just four carries in the Rams' win over the New Orleans Saints in the NFC championship game.

But, Gurley said at Super Bowl LIII Opening Night that there is nothing wrong with him physically and he is excited for Sunday's game against the New England Patriots.

"I'm feeling good," Gurley said. "It's a good feeling. You just get on that field and you just feel like you can't be stopped. That's how you're supposed to feel."

Gurley, who missed the last two games of the regular season because of a knee injury, finished 2018 with 1,251 rushing yards and 17 touchdowns. But, he tallied just 10 yards on the ground in the victory over New Orleans.

"I guess things didn't finish out as strong as they started," Gurley said on Monday. "But, I'm here at the Super Bowl. So, that's all that matters.

"I'm going to do whatever I can do to help this team win."

"Things didn't finish out as strong as they started...

Meanwhile, Patriots star Rob Gronkowski had some fun during introductions but became serious when asked about his future.

The 29-year-old tight end did not rule out retiring after the Super Bowl.

"I don't know," Gronkowski said when asked if Sunday will be his last NFL game. "I'm thinking about how to get myself to go full go [against the Rams]. Just working on that."

Gronkowski caught 47 passes for 682 yards and three touchdowns in 13 games for New England this season. He has made five Pro Bowls during his nine-year career.

"For him to even take the time to text me after a game, it means a lot."

Sean McVay on his relationship with Bill Belichick. (via @Nate13Burleson) #SBLIII

"I'm not giving him any advice." #SBLIII

The Rams and Patriots will matchup in Atlanta, Georgia on Sunday.