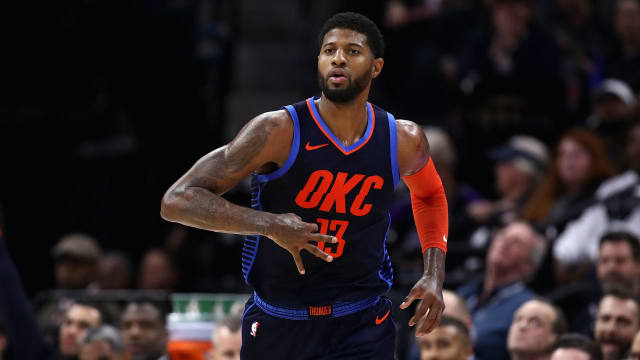 Paul George inspired the Oklahoma City Thunder to a 118-112 win over the high-flying Milwaukee Bucks in the NBA.

While the Bucks (35-13) trailed by 14 points at half-time, a second-half surge brought them back into the game late. But the Thunder triumphed thanks to George on Sunday.

George made eight of his 12 three-point attempts and finished with 36 points, along with 13 rebounds.

Giannis Antetokounmpo tallied 27 points and 18 rebounds, but the Thunder made things tough for him around the rim.

He was blocked a career-high seven times in the game, which made all the difference. Oklahoma City showcased their defensive prowess, racking up 10 blocks in all.

The Thunder (31-18) pushed their winning streak to five games and snapped the Bucks' six-game winning run.

James Harden had 40 points and 11 rebounds for the Houston Rockets in a 103-98 win against the Orlando Magic.

Luka Doncic became the first NBA player with multiple triple-doubles as a teenager. The Dallas Mavericks rookie tallied 35 points, 12 rebounds and 10 assists in a 123-120 loss to the Toronto Raptors.

Andrew Wiggins scored 35 points as the Minnesota Timberwolves fell 125-111 to the Utah Jazz.

Ivica Zubac had 24 points and 16 rebounds in the Los Angeles Lakers' 116-102 win against the Phoenix Suns.

Westbrook not up to usual standards

Josh Richardson shot three-of-10 from the field in a 12-point performance as the Miami Heat beat the New York Knicks 106-97.

Gay with the dagger!

Rudy Gay went baseline for a slam in the San Antonio Spurs' 132-119 win over the Washington Wizards.

Wayne Selden hung in the air on this no-look assist to Bobby Portis, but the Chicago Bulls fell short to the Cleveland Cavaliers 104-101.

The Brooklyn Nets are one of the hottest teams in the Eastern Conference, riding a six-game winning streak while the Boston Celtics lost a close game to the Golden State Warriors on Saturday. The Nets will enter the game directly behind Boston in the standings.