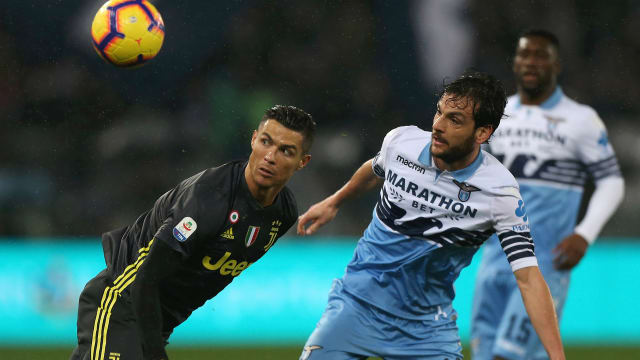 Cristiano Ronaldo scored a penalty with two minutes remaining as the defending champions somehow avoided their first Serie A defeat in the season with a come-from-behind 2-1 win away to Lazio.

Substitute Joao Cancelo's first Juventus goal looked to have salvaged a fortunate point for Juve, but they then went one better as he then won a late penalty which was converted by Ronaldo, his 15th league goal of the season.

Cancelo, having just come off the bench, had struck with 16 minutes remaining, cancelling out Emre Can's earlier own goal as Juve moved to 21 games unbeaten in the top flight this season.

They move 11 points clear of Napoli - who drew with AC Milan on Saturday - at the top of the table, despite having been second best for much of Sunday's match at Stadio Olimpico.

Massimiliano Allegri's men failed to register a single shot during a first half where they lost an emotional Leonardo Bonucci to injury, with Wojciech Szczesny making a superb save from Marco Parolo and Daniele Rugani clearing a Ciro Immobile effort off the line to somehow keep the match level.

Can's mistake just before the hour mark eventually gave Lazio the lead, with Juve never looking likely to respond until Cancelo's impact from the bench.