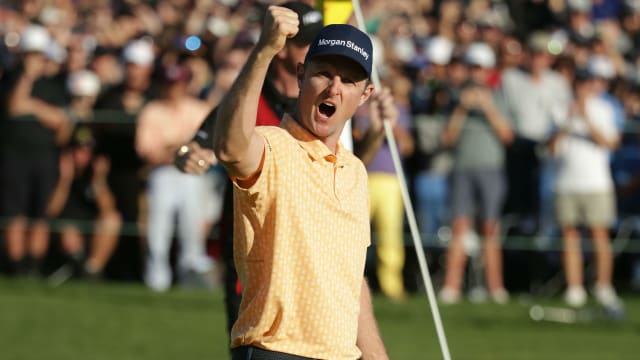 World number one Justin Rose held on for a two-stroke win at the Farmers Insurance Open and his 10th PGA Tour title.

Englishman Rose carded a three-under-par 69 in the final round to win the tournament in San Diego, California on Sunday.

Top-ranked Rose entered the round atop the leaderboard and he stayed there despite the challenge of Adam Scott, finishing 21 under overall – becoming the first player since Peter Jacobsen in 1995 to post four successive rounds in the 60s at the event.

Rose struggled to open his round, bogeying three of his first five holes. But, he recovered with birdies on the par-four seven and par-five ninth holes before adding three more on the back nine to secure his first PGA Tour win since May 2018.

"The offseason was short and sharp," said Rose, whose 10 Tour wins is now the most among English players, moving ahead of Nick Faldo. "I didn't know how I was going to come out. It's awesome to play that well this week."

Australian Scott placed second at 19 under following his four-under-par 68 at Torrey Pines, while Hideki Matsuyama (67) and Talor Gooch (68) were three shots further back.

American star and 14-time major champion Tiger Woods registered a five-under 67 in his final round and finished in a tie for 20th place at 10 under.

Woods tallied six birdies and one bogey as he closed out his first appearance of the season.