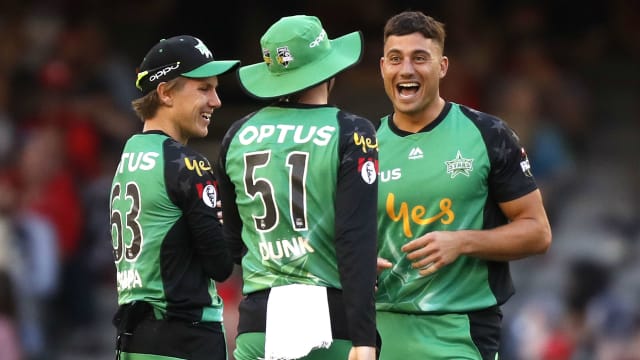 Marcus Stoinis celebrated his call up to Australia's Test squad by helping Melbourne Stars clinch a five-run win over Brisbane Heat in a low-scoring thriller in the Big Bash League.

All-rounder Stoinis – in contention to make his Test debut in Canberra next week against Sri Lanka – top-scored with 43 off 29 deliveries in his side's total of 134-8 at Melbourne Cricket Ground.

Brisbane's reply stuttered to 54-4 but Matt Renshaw's knock of 45 raised hopes of clinching a much-needed fourth win in the campaign.

However, Stoinis removed Renshaw, Jimmy Peirson and Ben Cutting in the closing overs, finishing with impressive figures of 4-21 from his four overs.

Left needing 14 off the last, Brisbane could only reach 129-8 as the rising Stars clinched a third successive triumph, moving them up to third in the table.

The @StarsBBL get out of jail and steal a third win in a row!! #BBL08pic.twitter.com/IMIAn6adnG

Stoinis' Test opportunity may come at just the right time in terms of his form. He has now scored 312 runs in this season's BBL, while also picking up 10 wickets in his last three outings.

His dismissal of Renshaw, released by Australia for domestic duties after not featuring in the first Test win in Brisbane, was crucial in deciding the outcome on Sunday.

An attempted ramp shot only resulted in a thin edge through to wicketkeeper Peter Handscomb, and from there Brisbane's chase subsided in the closing stages.

Melbourne's spinners had done the early damage, though, skipper Glenn Maxwell getting Brendon McCullum for 13 after Adam Zampa had trapped Heat skipper Chris Lynn lbw for a four-ball duck.

Yeahhhh, these clapping sticks aren't as fun when you're only got one#BBL08pic.twitter.com/ZXmh7uDvki

Together with Ben Dunk (24), Stoinis shared in an opening partnership worth 63 for the Stars, who finished bottom of the table last year.

Cutting ended the first-wicket stand with his first delivery, trapping the right-hander in front as he shuffled across to work a full ball to leg.

While Nic Maddinson and Dwayne Bravo contributed 18 and 17 respectively, the Heat's attack restricted Melbourne following such a solid start to their innings.

Brisbane's efforts with the ball looked set to be rewarded when they needed 35 from the final five overs with six wickets in hand in the second innings, but Stoinis had other ideas.