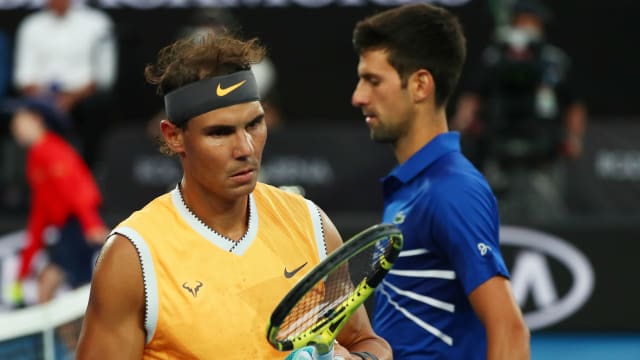 Rafael Nadal will keep working hard in his bid to win the Australian Open again despite suffering a humbling defeat at the hands of Novak Djokovic in this year's final.

The Spaniard had not dropped a set going into the showdown between the top two seeds on Sunday but was brushed aside 6-3 6-2 6-3 in a little over two hours.

Nadal has now lost four successive finals in Melbourne since securing the title in 2009 yet was able to reflect with pride on his performances, particularly as it was his first competitive tournament since the US Open.

A knee injury cut short his 2018 season, including missing out on the ATP Finals in London, but he is now excited about what the future holds.

"It's been an emotional two weeks. Even if tonight wasn't my best day, of course, I had somebody who played much better than me, but it has been a very important two weeks for me," he said in his post-match speech.

"I have been going through tough moments during the last year. I only had the chance to play nine events and had to retire in two, including this one, which was a painful one.

"Since the US Open, I was not able to play a professional match before the first round of the Australian Open, so even if tonight was not my night, it was so important to be where I am today when coming back from injury.

"I really believe that I played a great two weeks of tennis and that will be a good inspiration for me what is coming [up]."

Nadal – who also lost an epic Australian Open final against Djokovic back in 2012 – will hope to add to his tally of 17 grand slams at the French Open in Paris, as he will bid to be crowned champion at Roland Garros for a third successive year.

"I can only say one thing – I'm going to keep fighting hard, keeping working hard to be a better player," the world number two added.

"I will keep fighting for the most important things. Sometimes this tournament has been tough for me, in terms of injuries and on other times in terms of opponents, like tonight.

"But I'm going to keep fighting, keep practicing and put all the things I have to come back and give myself better chances in the future."