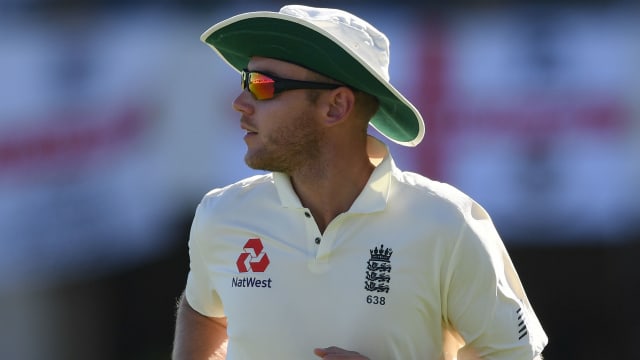 Stuart Broad believes his bowling has never been better and was "very disappointed" to be left out by England for the first Test against West Indies.

The tourists opted to pick two spinners in their attack in Barbados, while Sam Curran's abilities with the bat saw the left-arm seamer get the nod as James Anderson's new-ball partner in the final XI.

"Naturally I was very disappointed to be sat on the sidelines this week as you would expect any player to be when not selected for a Test match," Broad said in his column for the Daily Mail.

"From a personal point of view, I would have loved to have a bowl on this Kensington Oval pitch - it looks like it's suited to the taller, faster bowlers.

"Another source of frustration is that I'm bowling the best I've ever bowled. I believe that 100 per cent. Everyone in this England group knows it too."

Broad, who received a rousing ovation from the large contingent of travelling fans when he went on as a substitute fielder in Barbados, appeared only once - in a dead rubber - during England's 3-0 series sweep over Sri Lanka at the end of last year.

The 32-year-old hopes he will get a recall when the series moves on to Antigua, while his long-term focus remains this year's Ashes series against Australia on home soil.

"To be honest, I knew I might not play many Tests this winter, not because of form but the conditions we would face and in Sri Lanka I could have no argument with being left out because it was a decision I would have made myself," Broad continued.

"On those pitches, 90 per cent of the wickets were taken by spin, completely unreceptive to pace and the best bowler of our time in Jimmy Anderson got absolutely zero out of them. If he couldn't, I certainly wasn't going to.

"And all the work I have done on my bowling since the end of last summer has been implemented with the Ashes in mind.

"We have talked as a group not to look too far ahead but, in an Ashes year, that series is always hanging over you. Everything I do now is geared towards that.

"I have no doubts in my mind that I will be in the XI at Edgbaston on August 1, or at Lord's for the Test match against Ireland that precedes it.

"That's not saying I'm not working towards getting into this team in Antigua next week but if you have longevity in your mind it means you are working really hard."